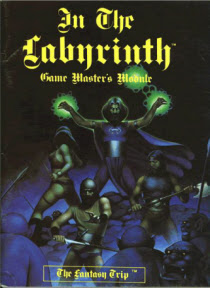 Though my focus is usually on D&D-based games, there's still one little RC out there with plenty of old-school cred that I think well-deserving of mention. During my misspent youth it wasn't always possible to get together an "appropriately" sized group for a good game of D&D, and fortunately for those times, Microgames came to rescue. Cheap, tiny, ridiculously portable, easy to learn, and *usually* fun (yes, there were a couple of duds), these little games ate up a lot of my freetime.

One of these that I particularly enjoyed was Melee, part of what, with its later companion game Wizard, was known as "The Fantasy Trip" (we're trippin' dude!). Like its more board-or-war-game oriented brethren, my (used) copy of Melee came in a worn little plastic baggie, with some tiny dice, a hex map, a tiny rulebook, and some battered counters of little gladiator-looking dudes. "In the Labyrinth" would develop the Trip even further, into what many regard as a quite passable rules-lite RPG with some cool combat options.

TFT would become quite popular in its own right, even amidst the crowded RPG landscape of the late seventies and early eighties. The owner of the game held a couple of notorious contests in which he provided clues to the location of a real Silver Dragon (and attendant 10k prize) and later a Gold Unicorn, which was never found (I believe I've narrowed the location down to three possibilities;).

At any rate, the game has vanished into the mists of time, some 25 years gone now, after a dispute between the owner and the game's lead designer, one Steve Jackson (yes, that one). Fortunately, the fellows over at Dark City Games have put together a short and sweet simulacrum of the complete TFT game (Melee/Wizard/Labyrinth) called Legends of the Ancient World and are happily chugging along making cool new adventures for the system. Check it out, its good stuff.

They also have a sci-fi variant of the ruleset, called Time and Space, which I find particularly cool, as rules-lite sci-fi games are extremely few and far-between.
Posted by Al at 5:52 PM