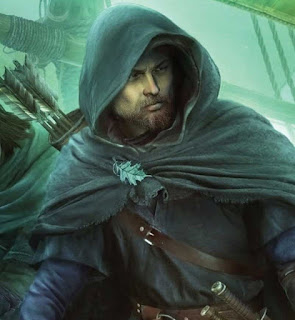 Sublime in its simplicity, the OD&D/Swords & Wizardry class of Fighting Man is the ultimate fantasy archetype: man with sword, ready to face down slavering dragons and cunning wizards. One of the strengths of the Fighting Man is that you can envision him to be pretty much anything you want. Knight, rogue, mercenary, crossbowman, gladiator, duelist, the list goes on and on. No specific rules additions are *necessary* to run your own Fighting Man within the specific archetype of your choice.

Nonetheless, there are times when it is desirable to more greatly reflect the differences between the various archetypes with specific rules, and this would quickly manifest itself as D&D evolved from the LBB's into AD&D. As supplements like Dragon and Greyhawk appeared, so to did classes like the Paladin and Ranger, created whole cloth as individual classes with their own individual rules.

As players in my S&W game got interested in branching out into other types of Fighting Men, I was reluctant to add more classes to the streamlined S&W ruleset. I especially wanted to avoid the apparentl tendency to give many fighting classes spells at higher levels. Instead, I decided to simply add a few rule additions to each variant of the Fighting Man. To justify paladin and ranger-flavored Fighting Men and their extra abilities, I also had to beef up the base Fighting Man class a bit, and came up with the Warrior. All the variants would use the basic saves, exp progression, experience bonuses, etc, of the Fighting Man, but would have two or three rule-based benefits to make them stand out from the crowd.

To take a look at my variant Fighting Men, click on the link here to download it. These variants are suitable for use with Swords & Wizardry, and may easily be used with B/X, OD&D, Labyrinth Lord, S&W Whitebox, and other similar rules-lite, old-school systems.

As always, any feedback is appreciated!