Something the OSR is missing? 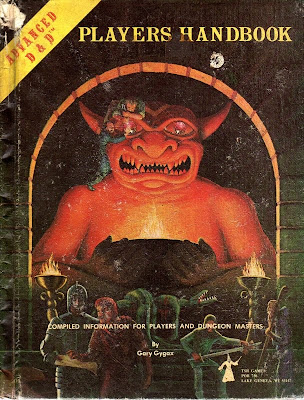 One of the new players in my S&W game brought his 1E (Tramp cover) PHB with him, and was flipping through it during character generation, finding stuff he liked and then looking for its closest approximation in the S&W books. He kept in front of him throughout the session with his dice, sheet, map, etc.

It reminded me of how much I enjoyed my 1E PHB, and the seemingly endless possibilities it presented. It not only included all the class and race info, but lots of adventuring advice, lengthy equipment lists, and so on. A lot of content, but not a single combat chart or stat block, and was a constant means of engagement with the hobby. All the number crunching and magic items were a mystery.

It made me wonder: could this be something the OSR is missing? The three "big" retros at least, S&W, LL, OSRIC, are all a complete game in one book. But no Player Handbooks.

I'm going to assume this is due to expediency: one book is a lot easier to produce than three. I'm sure it also has some roots in the original point of the retros, which was not to replace the original games they were modeled on, but to facilitate the publication of new supplemental materials for those original games.

But now I have a nagging feeling that there is at least one cool aspect of the hobby that retroclone players are missing out on. You either don't get your own book at all, or get a book with all the game's statistical mysteries revealed.

My first instinct is to just print up some home-made PHBs, maybe the character and spell sections of the S&W rulebook .pdf with Matt's Primer for Old School Gaming thrown in, but I can't help but think there could be more to do with this.

I spotted a stack of five or so 1E PHBs at a local game store a few weeks back. I'm thinking I might go back and buy them all, so I have them if I ever decide to play 1E again, and want everyone to have their own PHB. The secondary market supports their fairly easy acquisition right now, but who knows what the future holds?

What do you think? Would you like to see some retroclone PHB's? Do you make your own already?
Posted by Al at 8:27 AM