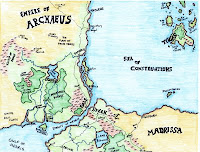 The Maps of Lornn were constantly evolving, I think the continental map above (click on them to make them bigger) was the sixth I created. Unlike other settings I've tinkered with, Lornn emerged from my mental picture of the setting, rather than me sketching out a map and then filling in the details later.

The very first map of Lornn was a sketch on the inside cover of a green folio, featuring crossed lines (roads) with a town in the center, called simply Crossroads. I added stuff as needed, until I started worrying about losing the details percolating in my head. When I finally had a continental map I was mostly happy with, I divided this into more than two dozen sections to be enlarged on their own maps, as you can see above with the Pale/Steek region. In retrospect it seems like a massive undertaking, but at the time it was just something to do while Mrs Ravyn watched ER or whatever;), and they seemed to fly by. I still have a couple of section sleft to detail, but they are corners of the map that have never seen action, and I think I'll save them for future visits to the campaign setting.

As important as maps are, they pale in importance to the players that are kind enough to come along with you. They are really the breath and life of the setting, making it a living thing, inspiring its growth through their interactions with it. I want to thank Dennis, Chris M, Rex, Rob W, Scott, Chris W, Jeff, Gary, Greg, Eric, Jen, Bill, Kevin, Marty, Brent, Steve Br, Molly, Bray, Tom, Rob, Steve Ba, Steve W, Matt, Mike, Rachel, Rick, and everyone else who traveled with me under the emerald skies of Lornn!
Posted by Al at 4:20 AM