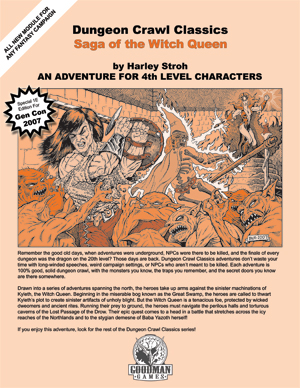 You've probably read, by now, the reports of Goodman Games' Dungeon Crawl Classics RPG in development. Judging by the quality of work they've done on the DCC modules line, they've got a pretty good idea of what makes something "old-school", from the art and classic layout, to the site-based nature of the adventures, to the fairly reverent Greyhawk-homage of their campaign setting. I think an original system is a good move on their part, even though everyone and their mother seems to have an "old-school" RPG in development right now.

One of the big strengths of the various retroclones (and, of course, their source inspirations) is that you can pretty much mix-and-match stuff from every game with little or no conversion required. That is to say, you can use the Swords & Wizardry "engine", with OSRIC classes, while playing through a classic TSR module like "Keep on the Borderlands", and its no strain on the GM or players whatsoever to make things jive.

Goodman Games would be wise to try and follow the same ethic, to as great an extent as possible. There are certainly "D&D-based" games out there, like the new Hackmaster Basic, for instance, that would not be easy to use with all that other stuff, due to some idiosyncracies like hit point "kickers", skills, and such, and I think such sytems suffer for it. Comparatively, something like Castles & Crusades is remarkably compatible with just about anything, while still retaining its own identity and flavor. How much more appealing is a system that is usable with stuff you already like, as opposed to something that is almost compatible? There are only a limited number of steps away a game can take from what most of us consider to be "D&D" before you might as well pick up something really different like GURPS or Rolemaster.

I posited a question last year about whether anyone would have a chance of producing "one clone to rule them all". To have a fighting chance, lets hope Goodman Games keeps the compatibility issue in mind.
Posted by Al at 10:14 AM