So, last Saturday morning I noticed the wives had not been fed, which always makes them ornery, so I went in search of Torgo, who was obviously shirking his duties, yet again! After some hunting, I discovered him dancing wildly around in the courtyard. Despite several commands to stop, he ignored me and kept dancing, so I put a couple of plastic bb's across the back of his neck with my Airsoft (a fun little toy, and reasonably safe!):

Which never fails to get his attention. Apologizing obsequiously, he hobbled up and I could see that he was using my IPod! Furious, I banished Torgo to an afternoon of slopping out the lower basements of the Ravyn estate, which tend to flood during the late summer rainy season.

Curious as to what could so thoroughly distract Torgo from his duties, I checked the playlist on the IPod and discovered he had been listening to one of my favorite "gaming" albums, "Legend" by Clannad. If you don't already know, this is the soundtrack from the Legend of Robin Hood series put on by the BBC in the 80's and broadcast by PBS here in the US. When folks talk about nostalgia in gaming, this show always comes to mind.

Throughout high school, Saturday was game day, starting late in the afternoon, and usually lasting far into the night. But before gametime, I was always sure to watch Dr Who (the inimitable Tom Baker in those days) and Robin Hood before setting out for the gaming garage. If you can find this gem of a record, its a wonderful piece of Celtic fantasy music. I almost forgave Torgo. Almost. 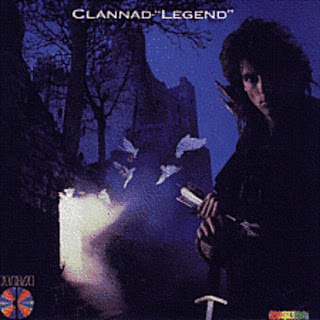 Speaking of nostalgia, check out Atom Kid's post on Shogun Warriors! I had the one pictured below, as well as a menacing black one that shot missiles out of its knuckles. These were the best, and in perfect scale (for toy giant robots) with my beloved HO-scale toy soldiers. Fun times. I can't wait til I'm old and senile enough that the family will let me get away with sitting happily in the backyard again and whiling the day away with epic battles between giant robots (sigh)!