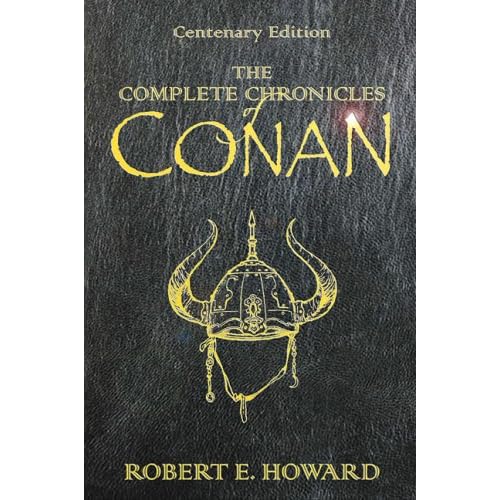 Now, I've read alot of Conan stories over the years. Those by both Howard and his devotees. I've got probably fifteen or so Conan paperbacks on my bookshelf, as well as a large box of the magazine-sized comics, and the first volume of the Savage Sword of Conan compilations Dark Horse is putting out.

The problem I've had is simply getting a handle on Howard's total body of Conan works. Not bundled with stories from other authors, or "revised" versions, but simply the real thing, as the author intended it, and complete from beginning to end. Three different books might have three different collections of stories, but almost invariably you're going to get at least one story in multiple books, and miss some stories you have yet to read. Naturally, this makes enjoying these stories as one complete collection a fan's nightmare (though, admittedly, an archivist's wet dream). If you've shared that frustration, then the Complete Chronicles is for you.

This book is massive, clocking in at just under a thousand pages, what they call a "trade paperback" (hardcover-sized paperback). The cover is black and marble-textured, which I suppose is supposed to represent leather. Sitting in Starbucks reading this thing feels like you've got a big Bible in front of you.

Which, as a pulp fantasy fan, I suppose this could actually be considered.

The stories are arranged in order of their publication, as opposed to chronologically as some other compilations have attempted to do. Strangely, it feels more natural, and works better towards giving you a feel of just what Howard was doing in writing these. Howard always claimed he never so much wrote as channeled these stories, as if the ghost of Conan was speaking through him, relating stories of his life as they happened to come up in conversation.

I'm sure I need waste no time reviewing the stories themselves, they are well known, especially to an old-school gaming audience, but if you have not yet read these stories (and I do know a couple of people who haven't, mainly because the movies turned them off), you really should. Howard possessed a brilliant economy of words, conveying depths in a few paragraphs that many writers can't achieve in multiple, wordy chapters. Howard presents no qualms of morality in his work; Conan is unabashedly motivated by his desires and passions: for lust, wealth, glorious combat, and adventure.

From a gaming perspective, the first work presented in the Complete Chronicles may be the most important: a short piece Howard wrote on the history of his setting Hyboria. He detailed the background of Conan's world and always stuck to it, which gives his stories a sense of realism, of having taken place in a world that actually existed. Someone creating their own campaign setting, or even sandbox, would be well served to follow this model.

Also including some never-completed works, poetry, snippets, and a nice afterword on Howard's life and philosphies, this is very much the "Complete" Compilation it claims to be.
Posted by Al at 7:42 AM