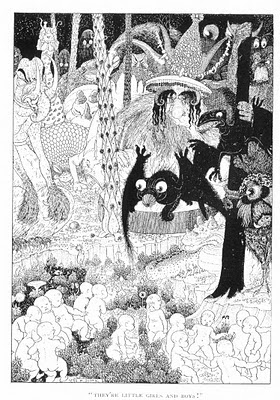 One day the demon Peshwigaruk'k (who infamously swallowed the puissant Jewels of Car Cule) came to lands of Trallus, the Golden King. He was greatly enamored of the rich crimson wine of the folk of the high mountain valleys of Frol, and wished to see its source. After a walk of twenty-four days through civilized lands, he came at last to the vinyards of the Golden King, and there gorged himself on the swollen purple grapes, as well as several of the King's servants who were unfortunate enough to get in his way.

Hearing of this violation, the Golden King took up the Raven Lance, mustered his knights, and rode out to challenge Peshwigaruk'k. Mighty as he was, and despite slaying several of the more novice knights, the demon could not stand against the ancient energies of the Lance, and was forced to flee. As one last act of defiance against the Golden King, and within view of both the monarch and his pursuing knights, the black demon squatted upon the border of Frol, and defecated out a mountain of filth, bones, and undigested grape seeds. Disgusted, the King gave up pursuit and let the demon escape.

Over the years, the foul mound would harden and the lands around it grew clotted with evil-looking vines and weird vegetation bearing evil-looking fruit. Creatures unwise enough enough to consume the dark grapes were quickly corrupted, and dug out of the mound a great hive of tunnels and lairs, choked with seeping slimes and the bones of whatever victims the denizens are able to drag into the lightless tunnels and consume.

Today, rumors abound in the alehouses and lotus dens of Frol that the legendary Jewels of Car Cule lie, still, somewhere within the Supperating Hive, awaiting some adventurer brave enough to challenge the hive's guardians. There are at least five (and possibly more) distinct varieties of creature known to lurk within the hive and its surrounding, vine-choked territory:

Hengis: The hengis appears to be a vile, red-feathered combination of goose and scorpion. Its tail is highly poisonous (save or suffer 2d6 dmg), and its bite diseased (10% chance). If near death, it will choke out a spray of noxious vomit (save or be rendered helplessly nauseated for 1d4 rounds) and flee. HD1+1; AC5[14]; dmg1d6; Save:F1, No. Appearing 2d4.

Tokus: The tokus, from a distance at least, appears to be manlike in form and stature, but is infact a sexless insectlike creature with gray, leathery skin and a face consisting entirely of snapping mandibles and waving chelae. The tokus are ravenous, and love to drag prey into the halls to consume alive at their leisure. HD2+2; AC7[12]; dmg1d8; Save:F2; No. Appearing 3d4.

Gargenai: The gargenai is a hulking shaggy creature with tiny black eyes, a bloated, pink underbelly and fourteen reptilian, clawed feet. Its maw is easily four feet wide and can swallow a man whole (natural 20). When attacking, it typically rises up on its back ten legs and slashes with the other four. HD6+6; AC3[16]; dmg2d4x4 or 2d8/rnd(swallow); Save:F6; No. Appearing 1d3.

Beoshe: The Beoshe appears as a beautiful maiden with ivory skin, long black hair, black eyes and unusually full, red lips. They are typically garbed in diaphanous gowns of white spider-silk, and carry silver carafes filled with wine made from the dark grapes of the Hive's vineyards. They typically use seduction and wine (save or be drunk as slow and charm person after only a sip) to secure their meals, but their nails are razor-sharp, rusty iron, and they can defend themselves more than adequately when necessary. HD3; AC7[12]; dmg1d4x2; SaveC3; No. Appearing 1d4.

Toableb: Perhaps the most horrific of the Hive's denizens, the toableb appear to be hairless, pink, swollen infants with razor-sharp iron teeth, glowing yellow eyes, and grasping hands. They travel in hordes, easily overwhelming all but the strongest prey, and move surprisingly fast and quietly. When their appetite takes hold they emit a wailing cry that turns even the bravest man's blood to ice, but when slain they emit a pitiable scream that sounds heartbreakingly human. HD1d4; AC9[11]; dmg1d3; Save:F1; No. Appearing 10d4.

The Puissant Jewels of Car Cule: There are, in fact, five of the legendary Jewels scattered here and there deep within the mound, though whether they have been corrupted by the demon's taint is unknown. Treat as Ioun Stones, randomly determined for your campaign.
Posted by Al at 7:38 AM