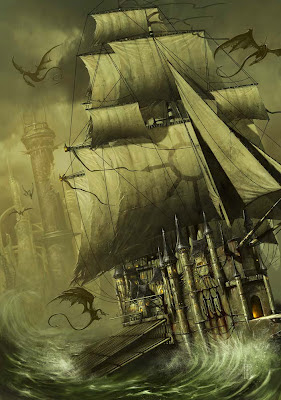 Use this table to determine where in the Three Seas your character is from (d%):

*Characters from the Southern or Northern Continents are typically only in the Three Seas because they are fleeing or hiding from an unpleasant past of some sort, or are some sort of merchant.

***The Sea Folk of the Three Seas are largely nomadic, and will typically range throughout the region following their trade or fishing routes. However, they still usually take pride in declaring a particular body of water as their "home" range.

It should be noted that fully half of the population of the Three Seas lives within (or within the protection of) one of the seven great City States. This is no exaggeration; the wild regions of the Three Seas are a harsh place to live. High birth mortality and low life expectancies are due to numerous factors including weather, predators, lack of food or potable water, and frequent raiding and wars.
Posted by Al at 8:52 AM