BtBG Reader: The Arsenal of Miracles 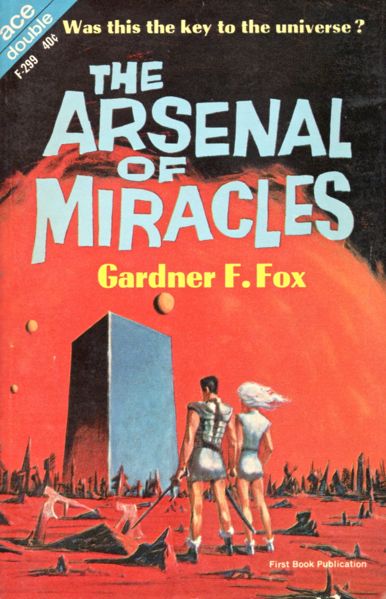 The Arsenal of Miracles, by Gardner F. Fox (perhaps best known as writer for a lot of original DC comics series like Batman and Flash), is an enjoyable tale of galactic intrigue and adventure. While the premise may sound like "hard" science fiction (as indeed most of the "ACE Doubles" were), the book is more aptly described as "Sword & Planet", with its wonderful melange of swordplay, mysterious princesses, and lost civilizations.

The book's protagonist is Bran the Wanderer, a disgraced former admiral of the Imperial Fleet who now haunts the backwater planets of the Empire, indulging in wine, low women, and gambling (assisted by some very special dice), as well as in brooding solitude. Bran has discovered a way to move from world to world, and visits many lost wonders, none of which cure his brooding nature:

"Some men found Lethe in the bottoms of their liqour mugs; others, in the women who flocked to the stews. Bran found his in far travels. The sandy world of Conchavar. The great green seas that roll eternally on Slithstan. The high rock mountains of Klard. He had touched them all. And yet, he wanted more. To see the marsh fires dance their blazing saraband on Duheel. To stare when the copper skies come down on Boharel and kiss the metal trees... To walk in the caves of Rann. To climb the Tors on Vomarr. A corner of his mind told him that he was a fool..."

Fox knows how to paint a picture with words: "He had been walking on for several years...travelling across the wastelands of the star worlds, appearing from out of nowhere on Costair or Uristhinn or Moorn, planets which dotted the crown of Empire which was flung across deep space. He never stayed long in any place. His feet itched for distant sands, for the waters of unseen planets and their high places that only Bran seemed able to find. After a while he became something of a legend. And then he went to Makkador..."

The narrative begins to move forward upon the appearance of the aforementioned Mysterious Princess, who interrupts Bran's lively gambling session with a wager of her own. The journey that follows is a difficult one; the heroes have anything but an easy time of it. The villains of the book are vain and overly ambitious, but cunning and competant nonetheless.

Fox does a good job of presenting an entire universe in one short novelette. This is not a brief episode, it is an adventure that fundamentally changes the universe. He has some great ideas, and manages to bring them to fruition concisely and effectively. Good stuff, and well-worth a long afternoon on the deck with a good drink close at hand.
Posted by Al at 6:25 AM