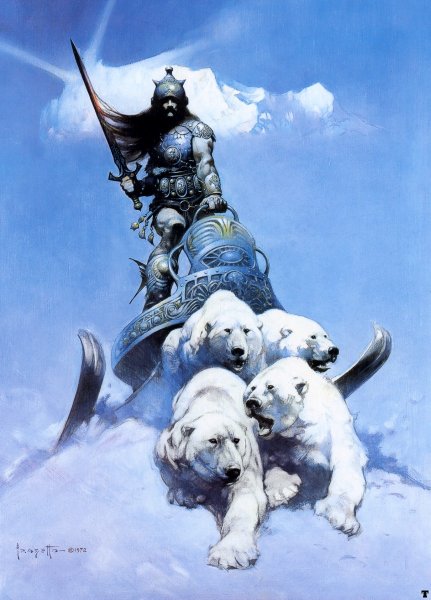 The snow-clad wilds of the Great Icewall are an inhospitable place. Nevertheless, some hardy adventurers are still foolish enough to attempt to venture into this icy nightmare in search of lost cities, forgotten mines, and other places of unguarded fortune. This snowy landscape is anything but unguarded, though, as it is the haunt of Xor the Hunter, a renegade Snow Giant, too cruel and debauched even for his own kind.

Across the frozen plain, he rides upon his silver-clad chariot-sled, pulled by four fierce polar bears, in search of human prey for both his larder and his couch. He resides in a great frozen manor perched on the edge of the Icewall, where he holds in thrall a tribe of some two-dozen Malamute-Gnolls. In combat he weilds the sword Fjordring, a +2 blade that would be a Two-handed Sword in the hands of a normal mortal, which slows anyone cut by its edge for 1d6 rounds.

Xor has amassed an immense treasure from his decades of depredation, and currently has seven "concubines" imprisoned in his manor. One of these, Giselwe, is a witch of some accomplishment (CE MU6 Int17 Cha15), who has been trying, to no avail thus far, to manipulate and control Xor. The remains of several men hang frozen in his larder, including the corpses of the "Lost King", Hinfast IV, and his retinue, who went missing four years ago during a crusade to find the Holy Rod of Parmuul, which still hangs from his belt.