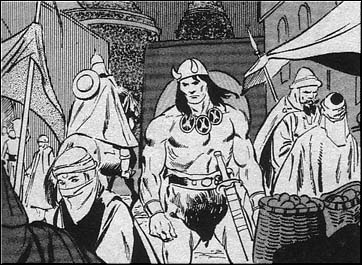 Yet again, the mere passing thought of Sword & Sorcery Greyhawk has sent me down the rabbit hole of DIY world-building. I don't know why the idea fascinates me so much, but a Greyhawk where Vance and Leiber hold more sway than Medieval History just seems...right. So here's some ideas for Dyvers:

Dyvers the Wicked
Dyvers is a bustling port city where the black waters of the Velverdyva River empty into the Lake of Unknown Depths. Originally an outpost of the Furyondy Satrapies, the city's Thieves' Guild took preeminance in 514CY, when they took advantage of Furyondy's economic hardships during the Holy Wars with Veluna to secede under Veluna's protection. After more than a decade of refusing tribute to Veluna, the city was beseiged by vengeful King Thrommel's bloodthirsty cavalry in 526CY. The seige lasted for only two months, until Thrommel's force was almost completely destroyed by poison and disease, helped along by Dyvers' fanatic assassins of the Temple of the Eye. No state has attempted to lay claim to the city since.

Some important locations in and around Dyvers include:

The Old Docks - Legend has it that the cyclopean stone blocks that make up Dyvers' riverside docks were there long before Dyvers, the remnant of some lost civilization of unknown beings. Those willing to risk swimming down below the sea-weed choked megaliths may spot curling runes and carvings of an unsettling nature, and further ruins lurk just beneath the surface of the Velverdyva, a hazard for unwary ships.

The Boulevard - The economic center of Dyvers, a hundred yards wide and a mile long, this infamous chalk road is typically choked with a maze of canvas booths and tents of all color and description, selling anything and everything from across the face of Oerth.

The Groves - A century ago this lowland side of the city was a slyvan hunting preserve for a Furyondyan Satrap; now, it is a winding ghetto with streets so narrow and choked with filth that the sun is only visible for one hour, precisely at noon.

Ziggurat of Iuz - This great black step pyramid is festooned with serpent-shaped chimneys that spew smog into the sky at all times. The worship of Iuz, the living god, has sprung up only recently in Dyvers, aided of course by the Magister's constant and closest advisor, Dar Hoon (9th level EHP of Iuz).

Temple of the Eye - This massive cube of mildew-stained marble has long been the religious center of the rich and powerful of Dyvers. Bloodstained altars accept sacrifice every night, and the temple trains an Assassins Cult that is among the most feared in Oerth.

Crickhouse - Once the abode of an immeasurably wealthy Nyrondi arms dealer, this sprawling, 400-room mansion now sits "abandoned", the subject of a thousand dark rumors expounding on the horrors of its haunted halls.

Iron Plaza - The center of Dyver's slave market, one of the most prosperous in all of Oerth, with buyers from as far away as Bissel and Aerdy in attendance.

Palace of Jhegaal - This marble and gold palace is the home of Jhegaal, the ruler and Magister of Dyvers (Thief, 12th level). Its harems and baths are legendary, as are its torture chambers and an extensive network of dungeons, the Pits of Jhegaal. Jhegaal's chief advisor, Dar Hoon (9th level EHP of Iuz), is never far from his side.

The Water Gardens - Just off the Boulevard's northern end are the infamous Water Gardens, a labyrinth of fountains, parks, hidden grottoes, and silken tent-brothels where any pleasure or vice is available for the right amount of coin.

Trichean Fountain - The centerpiece of this wide fountain in front of Jhegaal's palace is a horrific bronze statue depicting a pair of maidens, possibly twins, in the final embrace of a giant fanged serpent. It is said the statue presents a riddle that, once deciphered, may lead to a treasure of dark origin.

Grogor Obelisk - This massive, tower-sized stone edifice at the midpoint of the Boulevard is carved with indecipherable heiroglyphics and images of strange, inhuman beings cavorting with demons. Though it has never been proven, rumor has it the Obelisk is hollow and filled with secret halls and chambers.

Carcoss Reservoir - Local legend has it that this reservoir was once a quarry that was dug all the way to hell. Now it is a still, depthless pool of dubious black water that many consider ill-luck to disturb.
Posted by Al at 5:08 AM