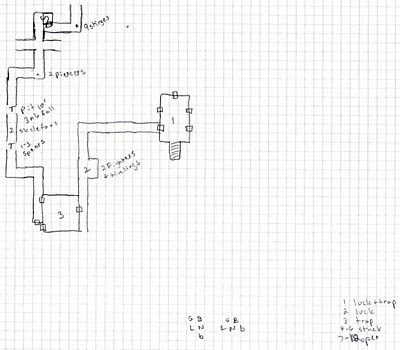 Last month when I was "rediscovering" AD&D, I convinced a couple of friends to let me try out the Random Dungeon Generator found in Appendix A of the DMG*. I had used this Appendix a couple of times in the distant past to help come up with a dungeon before a game session, but never actually just opened the book and run a session right out of it. I warned the guys that this would be a completely random dungeon, so anything was possible, and that I was going to Let The Dice Fall Where They May.

First up was rolling character, which I wanted to do "by the book"AD&D style, having not done so in a while (Method 1, p11). This was going to be "original 3 books" only - no UA, Best of Dragon, etc. I rolled up an NPC along with them. I should pause here to recommend Mad Irishman's awesome 1E Character Sheet replicas. Having one of those in front of you is like riding a Time Machine. Character generation took all of 10-15 minutes, and we soon had a Fighter (with an 18/73% Strength!), a Magic User, and a Cleric. Oh yeah, their names were "De Gausser"(?), and "The Norseman"**.

De Gausser and The Norseman arrived in the shanty town of "Dregs", somewhere on the edge of the "Forbidden Lands". There, they were approached by Rick, who told them he had been sent by his church to investigate an underground temple complex abandoned by a lost cult for more than a century. Rick assured them there would be treasure aplenty, and they could split it evenly, with any religious artifacts being considered Rick's share. De Guasser and The Norseman decided that would likely be the only interesting thing to do in Dregs, and so, after purchasing some dungeon crawling goods, a mule, and hiring to 0 level redshirts, "Luke" and "Barry", they set off into the Forbidden Lands until they came to a hill topped with some crumbling pillars and covered in razor sharp broken shards of slate.

For the curious (and because I have it written down on my scratch paper), the equipment purchased was: 10 Leather Sacks, 2 Dozen Arrows, 4 Spears, 2 Suits of Leather Armor, 2 Backpacks, 2 Tinderboxes, 5 Waterskins, a 10' Pole (hah!), 20 Torches, 50' of Rope, and 14 days of food, which came to a total of 31gp, 6sp, and 3cp. Apprentice "The Norseman", as rich as most 1st lvl Magic Users, footed the bill, reluctantly.

A wide stair at the top of the hill led down into darkness, torches were lit, and the dungeon crawl began. I rolled a d6, and came up with Start Areas for Random Dungeons number 4 (enlarge the map above for a better look). Bored with stereotypical dungeon decor, I told the players everything down here was gleaming white marble, pristine, glossy, and bright as is if it was cleaned 5 times a day. The walls and floors were segmented into 3' squares, like the walls of a mausoleum.

The players chose the first door on the left, which brought me to my first challenge, I couldn't immediately find anything in the Appendix about doors. Plenty about what's behind the doors, but not the doors themselves, so I scribbled this little table on the map (d12):

The first door was open.

Roll, roll, roll, off they went down a long hall, exploring carefully everything along the way. This hall took like 30 minutes, and nothing happened, but the guys seemed to enjoy it immensely, tapping on the walls, trying to pull the mausoleum-style squares of marble off the wall, poking at the ceiling with the 10' pole, and so on. Eventually, they moved on, turned a corner south, and came to a chamber where they encountered their first monster (roll, roll, roll): NPCs! (Roll, roll, roll), these turned out to be 2 1st level Fighters and their retinue of followers (4 men-at-arms, and 3 porters/torchbearers). A sort of standoff ensued while both parties sized each other up, exchanged insults, and glared a lot. Eventually both sides deemed they were sort of evenly matched, and went their separate ways, though the promise of future aggression was definitely implied. This encounter actually took a bit of time up, and was fun to roleplay. Sort of "Westerny" in feel actually.

Continuing on (roll, roll, roll), the party found a large room, which was completely empty, except for some more doors (roll, roll, roll) all of which were open (you can see on the map here in the lower left hand corner, randomization leads to some oddly close quarters sometimes). Past a door was another hallway, and the players barreled down it (they had by now provided me with a "marching order", and a "fighting formation", which are the little letters on the bottom of the map), and completely forgot to check for traps anymore. (Roll, roll, roll) a pit! With spears at the bottom! Luke fell in and died. Then they immediately encountered 2 skeletons, which Bad Rick was completely incapable of Turning for some reason (ie crappy rolls!), but were dispatched fairly easily otherwise. Then another pit, which Barry fell into and died. This dungeon apparently eats hirelings, so the players swore they'd bring more last time.

On down the hall, they were ambushed by 2 Piercers (which I made look like marble plates so as not to appear too incongruous) which both missed, and were pretty easy to kill after that. Moving on, they found a secret room (empty), and some more hallways.

Then came the stirges! Nine of them, and tough little buggers. Totally overpowered for three measly 1st level characters, right? No. While they were pretty banged up, the party managed to defeat them by the skin of their teeth. I rolled that their lair was nearby, and ruled that it was in a tomb behind an open marble plate. Then I started rolling on the random treasure table for the Stirge's treasure type. I came up with:

Now, normally I would scale that back a whole lot for a 1st level party, but I was letting the Dice Fall Where They May, so there you go. The challenge was getting 1100 lbs of treasure out of the dungeon. The party made a few trips out of it, carefully avoiding the NPC fighters that were still lurking around the dungeon, and buried the treasure outside. They went to down, bought some more mules and redshirts, and came back out to get it.

Everyone made 2nd level!

It was actually fun, and I enjoyed being as surprised as the players were with every twist and turn. Try it sometime. But bring beer.