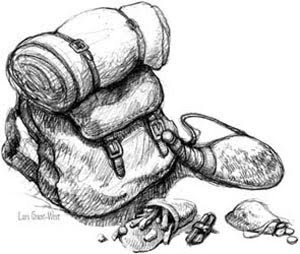 While plenty of adventurers make do with the mundane equipment available at the general stores common in most towns and villages, some enterprising entrepreneurs have made a cottage industry of providing and designing items specifically targeted at explorers and adventurers. While not available in every small village and hamlet, most larger settlements will have at least one merchant specializing in gear like the items detailed below.

Owl (15gp)
An Owl is a strange contraption consisting of a glass bowl filled with about a half pint of oil, a waxed wick, and a balsa and gossamer set of wings and levers. When lit, the heat from the lamp causes the wings to beat, and the Owl hovers at the end of a string (tied to an explorer's backpack, for example) and illuminates an area of about 30' across until the fuel is consumed. While useful for hands-free illumination, Owls are fragile, and should be stowed securely when not in use.

Troll's Blanket (5gp)
The so-called "Troll's Blanket" is a wool blanket that has had random patterns of stiffening resins and natural stone coloring added to it. If thrown over an individual or object it can camouflage them to appear as part of the natural surrounding stone.

Bladder Pack (15gp)
This is an otherwise normal backpack that has been oiled and sealed to make it airtight and waterproof. When necessary, it can be emptied of gear and inflated via a thin leather tube to make a handy flotation device.

Explorer's Belt (20gp)
This is a double-looped belt (typically 5'-7' long) of extremely sturdy, fireproofed, leather with a hook and ring instead of a buckle. It can support the weight of two grown men, and makes a handy tool for climbing and swing short distances, pulling heavy objects, hooking and pulling things out of holes, binding captives, and so on. Several of them can even be linked together to form a strong rope.

Prayers of Hwyl (5gp)
These are small rectangles of white papyrus with a single black rune inscribed on them. If placed upon an object or creature that is evil, or a container that contains something evil, the papyrus slowly curls into char and crumbles away. The albino hermit, Conspectuous, is known to sell these more cheaply (2gp), but his are not so reliable.

Phoenix Eggs (5gp)
The are small white marbles that, if thrown forcefully to the ground, explode into ten cubic feet of white smoke that dissipates after 1d4 rounds. The possession of Phoenix Eggs is illegal in the local capitol, where they are known as Cuckold's Eggs, due to reasons that are entirely unrelated to Megadungeons.

Iron Sentry (10gp)
This is a foot-long wedge of two pieces of iron with a spring-loaded mechanism between them. It can be rapidly shoved under a door, where it will spring open and effectively jam the door until its broken free.

Thumper (30gp)
Rumored to have come from a far-off desert place, this metal-and-membrane tripod contraption may be set upon a solid floor. A plunger in the middle is raised and released, and will then thump onto the floor repeatedly, making vibrations similar to heavy footsteps. This is useful when it is necessary to summon or distract denizens of the Underworld.

Water of Ylalla (150gp)
This small vial of spring water has been blessed by the Goddess of Fertility. If poured upon seeds, they will achieve a year's worth of growth in just ten minutes.

Scrimm's Bottle (100gp)
This is a bottle of heavy green glass that has been etched with holy epitaphs and comes with a silver stopper. If presented in the presence of a ghost, phantom, shadow, or other such incorporeal undead, the spirit must save or be drawn into the bottle. The spirit will remain trapped in the bottle until such time as the stopper is removed. Each bottle may hold one spirit.

More Megadungeon Equipment here and here.
Posted by Al at 7:51 AM