What happens in a combat round? 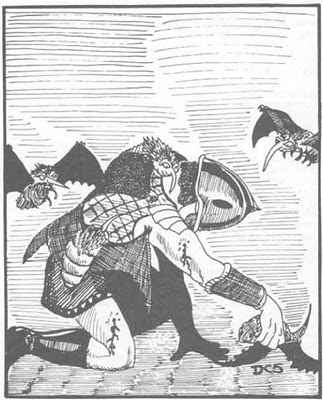 I often see a character's action in a combat round broken down into "I swing my mace" or "I move". This is a conceit that seems to have been taken to further extremes in later editions via stuff like iterative attacks in 3E ("I'm 6th level, I swing my mace twice!") or the even the "powers" of 4E where every attack is a single event with a particular and individual description. A recent poll presented by a 4E designer described the old-school option of a simple attack roll as "doing the same thing over and over again, round after round in a fight".

To me, a character's actions in a combat round, while often resolved by a single attack roll, are much more diverse and complex. For instance, in a recent session, a character with a stirge attached to his back threw himself backwards into a wall, dislodging the stirge which fell to the floor, and then skewered it with his blade killing it. This was my description for what happened when the player rolled a single successful to-hit and enough damage to kill the stirge.

What happens in a combat round for you? What does an attack roll mean to you: one "swing"? Or the general success of several attacks, parries, and fancy footwork?
Posted by Al at 12:09 PM