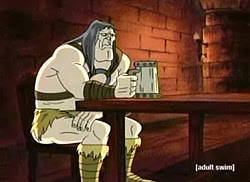 Most of you have seen the pilot for Korgoth of Barbaria by now. What you may not know is that the series was shelved before the pilot was even aired (for a variety of rumored reasons, some of them fairly insulting to fans of the Sword & Sorcery genre). Even "Assy McGee" got a couple of seasons (yep, "Assy McGee", good call, guys) :\

At any rate, some folks have taken the time to start an online petition in an attempt to get the ball rolling on this again. Proabably futile, but who knows? If you liked the Korgoth pilot, take a moment and add your name to the list!
Posted by Al at 4:43 AM