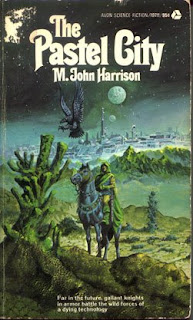 If you recall from this post, a little treasure I came across recently was "The Pastel City", by M. John Harrison. Having never heard of the author, I picked it up solely on the strength of the cover, which features a rangerish-looking fellow riding into a wasteland, out of a futuristic steel city. At the bottom of the cover was a little blurb that appealed to my interest in mixing sci-fi and fantasy: "Far in the future, gallant knights in armor battle the wild forces of a dying technology".

Released in 1974, the book is a charming and succinct (174pages) work of science-fantasy that covers a surprising amount of ground. The premise of Harrison's universe is a familiar one to fans of Jack Vance's Dying Earth: the Earth is at the end of its days. Mankind has peaked, traveled to the stars, and then receded. Most knowledge has been lost, and men eke out an existence, scavenging the wastelands for the technologies of higher civilizations long ago fallen.

Every so often a new golden age is achieved from out of the savagery, as is the case with the heroic king Methven Nian, and his doughty knights the Order of Methven (or simply, The Methven). But king Nian is dead now, leaving a strong illegitimate "heir" and a weak legitimate one to battle over the remains of the decaying kingdom. The Methven are old and scattered, lost in their own pursuits as their legacy falls towards an inexorable doom.

The story centers on tegeus-Cromis, once the greatest swordsman of the Methven knights, who lives in self-imposed exile on the edge of the crumbling empire. An violent incident strikes near to home, making him realize just how bad things have gotten while he's been away, and he strikes out to fulfill his bond to his dead king and protect the legitimate heir. Along the way he collects what few remaining Methven he can find, and sets out to find a means of overcoming the awful technological evil the pretender to the throne has unearthed in the northern wastelands. Tragedy and betrayal are common in this adventure at the end of time, and the outcome is not what you would assume.

Harrison's writing style is enjoyable and descriptive, somewhere between Moorcock and Vance if you go for such comparisons. At one point the Methven must venture into a post-apocalytic swamp:

"In the water thickets, the path wound tortously between umber iron-bogs, albescent quicksands of aluminum and magnesium oxides, and sumps of cuprous blue or permagranate mauve fed by slow, gelid streams and fringed by silver reeds and tall black grasses... Charcoal grey frogs with viridescent eyes croaked as the column floundered between the pools. Beneath the greasy surface of the water unidentifiable reptiles moved slowly and sinuously. Dragonflies whose webbing spanned a foot or more hummed and hovered between the sedges; their long, wicked bodies glittered bold green and ultramarine; they took their prey on the wing, pouncing with an audible snap of jaws on whining, ephemeral mosquitos and fluttering moths of april blue and chevrolet cherise."

If you're looking to run a Thundarr-style campaign, you can do a lot worse than reading this book for inspiration.

Harrison still lives and writes in England, and there are apparently two further works that follow "The Pastel City"(though City is a complete novel in and of itself), making up a trilogy referred to as the Viriconium Sequence. After this novel, I'm definitely hungry for more, and will be keeing an eye out for these.
Posted by Al at 7:24 AM