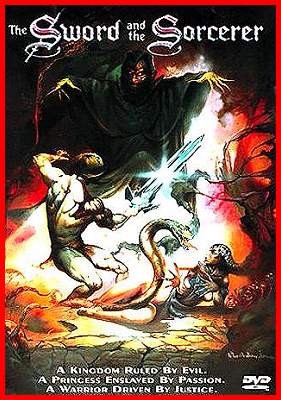 After more than 2 decades, the sequal to The Sword & The Sorcerer (1982), "Tales of an Ancient Empire" is filming. It is even being helmed by the original director, Albert Pyun, who is a sort of modern day Roger Corman. Some production clips from the film can be seen here.

I have to say the original film is a guilty pleasure of mine; though often reviled by more critical folks, I found it to be enjoyable, funny, and escapist. And lets face it, pulp fantasy films aren't exactly a power-genre in Hollywood. Probably, we're never going to see a 200-million dollar big-budget version of Lankhmar starring Tom Cruise, The Rock, and Selma Hayek (does picturing that film make your blood pressure rise?;). Compared to fantasy with more universal appeal, like Lord of the Rings or Narnia, dark Sword & Sorcery is a niche within a niche (something us old-school gamers should be familiar with).

And so I embrace the occasional, and admittedly cheesy, strait-to-DVD genre film that comes along, a custom I've been following since that first string of "Sword & Boob" films from the early 80's.

The clips linked above look ok. I imagine an aging Kevin Sorbo traveling around with a group of beautiful, young female warriors holds a certain amount of wish-fulfillment for many of us;)

I just hope Pyun tones down the feaux-Enya a bit.
Posted by Al at 4:59 AM