The "Appendix N" of Episodic Play 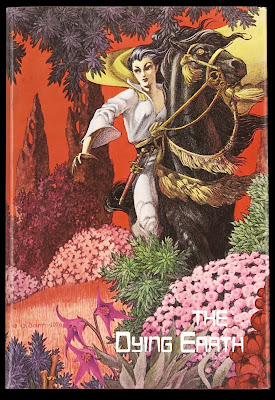 There are five "textbooks", if you will, that I consider to be required reading for referees and players interested in Episodic Campaigns:

Really the most important, in my opinion, on the list here, The Dying Earth is the "bible" of science-fantasy, episodic gaming. Consisting of three books composed of a number of picaresque tales featuring a changing cast of eclectic persons, the world is the real character. The setting takes on depth and life and continuity, as tale after tale unwinds. As each tale unwinds, the human elements may come and go, but the setting continues to become more compelling, more saturating. This is something you want to replicate in the episodic campaign - characters can drop in and out, stories and adventures may begin and end, but the players always have a constant, cohesive sense of the world they're adventuring in, making it easier to return, or maintain involvement when events take unexpected turns.

Besides being one of the most iconic and engrossing bodies of hardcore Swords & Sorcery literature you can read, it is also, almost by accident, an amazing example of how Episodic Play can allow you to jump around in time. Conan's fate to become king was known from the beginning - the tales of Conan's past were not told in sequential order. Again, you have a body of work told in very separate and distinct pieces that nonetheless form a cohesive whole.

Imagine running a campaign where players roll up not 1st level characters but 10th level - beginning in the endgame. From time to time, though, a session looks back in time, and the players play out the adventurers that led them to their current lofty states.

A great set of books, wherein the cohesive whole is made up not just of different stories and characters but written by different authors! The stories, perhaps, would have been more appropriately gathered under the heading "City of Thieves", as the action seldom leaves the mean streets and shadowed back alleys of Haven. Which is why you want this as an Episodic Play resource - there is a metric ton of inspiration here for city-based campaigns. Grab your copy of City State of the Invincible Overlord, read a couple of these stories the night before each session, and you be good to go!

Lovecraft manages to build not so much a campaign setting through his loosely-connected tales of Old Ones, Madness, and Mysteries Best Left Undisturbed, but a campaign feeling. You know, when you open the first page of a Lovecraft tale, that the protagonist is likely doomed. The only mystery of the tale is the exact nature of that doom: a horrific death? Subversion to some lost ritually initiated mutation? Complete loss of sanity?

This is a good guide for running an episodic play wherein the players are rolling up characters each session that are essentially doomed from the very beginning. No one expects to run the same character again next session - but perhaps they may encounter one as an NPC in the local asylum!

I include Leiber's tales by necessity - the breadth and scope of Lankhmar's universe is dazzling, and worked so subtly into the adventures of Fafhrd and the Gray Mouser you almost don't realize it until you look back on the stories later on. Without a doubt, an achievement to strive for for any referee or world-building engineer. The great variety of types of adventures here makes these tales a vital reference - sorcery, romance, war, mystery, every genre abounds here, waiting to inspire your next session.
Posted by Al at 7:32 AM