Short Adventure - Beneath the Crystal Dome 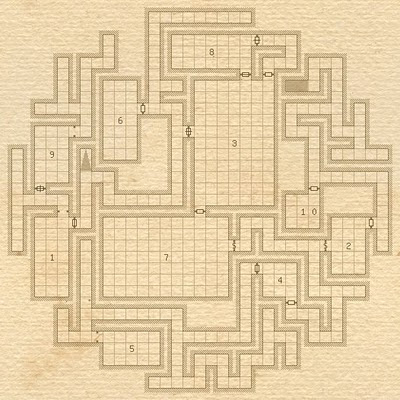 This is a short Science-Fantasy adventure I thought I'd share with you. Hope you find some use for it. :)


Beneath the Crystal Dome

Out in the Western Waste, beyond the great stone head of Oos, a cracked crystal dome, streaked with blue and green algae and draped in moss, rises from the suppurating peat of the bog. Strange stone columns jut from the ground here and there around the dome, and skeletons caked in green slime are hanging from several of them. An unsettling deep buzzing, as if from cicadas the size of wagons, fills the steamy air.

At the top of the dome (60' up, and difficult to get to) is some sort of metal, valve-like entryway, not unlike a submarine hatch. The valve opens easily, as if it has been dutifully maintained. The wilderness around the dome is crawling with man-sized, green and black beetles. The beetles are hostile and will cut men to pieces with their razor-sharp mandibles. If cut open, each contains a small black metal box with a single flashing red light and a clump of wires that attaches to the insects' brainstems. On a roll of 20 the beetle has injected a paralytic poison into its victim (save -2) and will feast at its leisure upon the still-living meal. (Bog Beetles - AC5[14]; HD2; hp10; atk bite; dmg1d6; Save F2).

Within the dome (300' across) is a tangled jungle (once a greenhouse of sorts) of bizarre and often hostile plant life. Roll once per turn on the table below to determine if anything lashes out at explorers. Near the western side of the dome, buried in fungal growths, is another hatch, leading to the tunnels beneath the dome. In the SE area of the dome is skeleton, still garbed in the flying leathers of the Air Pirates of the far north. At his belt is an ornate, brass and wood radium pistol with 11 rounds of ammunition (Dmg 2d4; Range 100'; RoF 1), a stainless steel shortsword with a rubber grip, and a flashlight-ring (as per the light spell) with about an hour of use left in its tiny battery.

The corridors are perfectly 10' high and 10' across, and perfectly level. The walls are stone but how they were worked is indeterminable. The stone is white in places, but mostly streaked with algae, mold, and mildew. A strong smell of decay permeates the air. A deep throbbing can be both heard and felt through the walls and floors. Every so often, a sharp "crack" (like the cracking a whip, only higher in pitch) echoes through the corridors and chambers. Doors here are stone with stainless steel handles, and most are stuck. There is a 1 in 6 chance per turn that the party encounters a group of 3d4 zombies in filthy white jumpsuits with steel maces. A stair in the NE area leads down to a subway terminal.

1. Bunk Room - This room contains 14 triple-bunk beds, the mattresses long since rotten away. A patch of Green Slime grows on the ceiling in the center of the room.
2. Control Room - One door to this room is secret, the other is locked. Within are several consoles covered in knobs and buttons (all smashed) and seven wall-screens. Six of the wall screens are smashed, but one still functions and gives a snowy image of the greenhouse interior above.
3. Map Room - The west door to this room is electrified (3d6). The floor of the room is glass, and depicts the SE area of the continent of Omegea (The Western Wastes, the Sunken Lands, the Fungal Forests, and the Quartz Barrens). Several points of light, pulsing weakly and connected by glowing lines, can be seen throughout the area. A small white box is clamped to one wall with a red "x" on it - it contains 13 syringes, only 4 of which are unbroken (2 as potions of healing, 1 as potion of cure disease, and 1 as potion of neutralize poison).
4. Examination Room - A dwarf in chain mail has been clamped to a white metal bed here. The corpse is dessicated, but still identifiable, and its chest has been clamped open to expose the internal organs. Its left boot conceals a small velvet pouch containing 9 small diamonds (100gp each).
5. Trophy Room - The walls are hung in various military banners. Seven manikins stand here, each dressed in a different sort of armor and weaponry (brass breastplate, shield, and spear; chain, norse-helm, and dane-axe; black studded leather and two curved daggers; scale mail, square shield with spike, and falchion; green-lacquered plate mail, great-helm, and musket; ring mail, insectoid helmet, and glaive; rune-scribed crimson kevlar vest, helmet, and greatsword. The plate-mail manikin appears to have some sort of ornate harness attached - this is in fact a 10-legged arachnid predator with whirling green eyes (as medium giant spider).
6. Empty Room - This room is pristine white stone. Not a fleck of dust. Not even a bacterium. Sleeping here causes 1hp damage per hour (radioactivity).
7. Laboratory of the Supernatural Anesthetist - A shriveled-looking man in a white lab-coat works here amidst flashing consoles, examination tables, and inscrutable tomes. Magic circles have been inscribed on the floor, and six glass sarcophagi stand along one wall (one contains a tanned-looking corpse clutching the lost Sword of Rhoghrim). The man is Lom - he is 700 years old, has a black gem in the center of his forehead, and mutters madly to himself as he works. Three of the examination tables contain unconscious humans - an old man, an adolescent girl, and a deformed local farmer - all of whom have been stuck with pins and have wired censors glued to various spots but are otherwise unharmed. Lom was an apprentice of the Mindlords of Dyskater before their fall. He will talk to explorers, but only to trick them onto his examination tables. Lom keeps a hoard of platinum bars (10 bars, worth 100gp each) under his filty cot in one corner. He can summon 1d6 zombies to his aid each round (max 30 zombies). Lom has a radio transmitter wired to his heart that initiates a self-destruct system in the lab if he dies (as 10HD Fireball, alarms will go off for 10 rounds prior to the explosion). (Lom; AC4; HD7; hp24; atk dagger; dmg 1d4; Save MU7; spell-like abilities charm person, hypnotize, hold person, slow, animate dead, confusion).
8. Store Room - The east door is electrified(3d6), and the south door is locked. This room contains crates of iron rations (about 20 man-weeks worth), 20 5-gallon plastic jugs of water, 12 hams, 1 case of purple wine bottles, 6 large wheels of cheese, 1 large box of powdered milk, 24 tin cans of chili, 6 large sacks of rice, and an assortment of dried meats and jarred olives. A jump-suited zombie stands here, inert unless molested, clutching a feather quill and a checklist.
9. Sealed Area - The south door is locked and electrified. This room has not been opened in the two-hundred years since Lom first came here. It contains the mummified corpses of the last 12 survivors who made there stand here during the assualt of Lom's zombie horde. Lom locked them in and let them starve to death. The mummies are garbed in white leather armor and fine-quality steel rapiers lie here and there. One corpse still clutches an extremely realistic looking painting (photograph) of a young woman and two small children.
10. Freezer - This room is a solid block of ice. What lies within, should the party choose to "defrost" it, is up to the referee.
Posted by Al at 6:53 AM