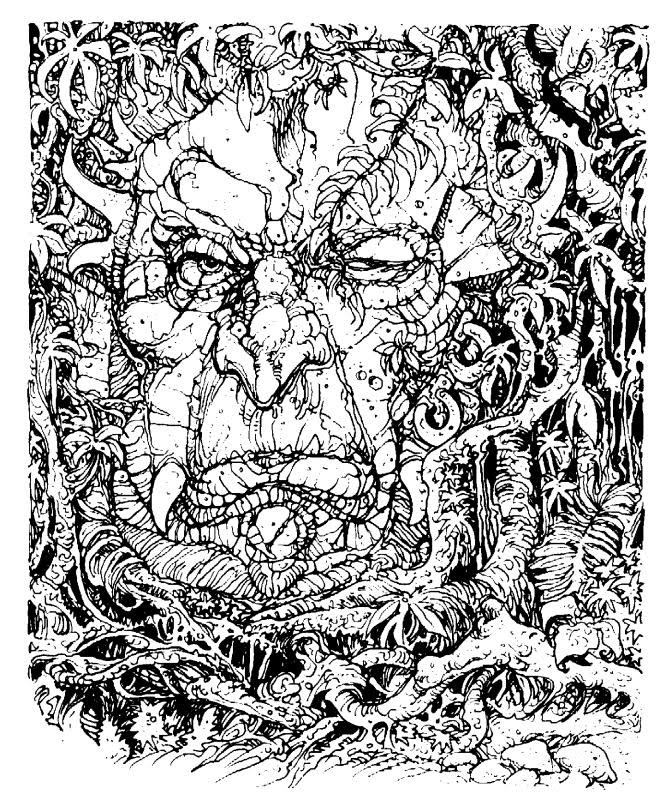 Session 2 - The Head in the Wastes

Session 2 opened with rolling a character for a new player. He played in my old 3.5 Wilderlands group years back, so it was fun to see a veteran "new schooler" experience the old school for the "first time in a long time".

The PCs spread their wings a bit more, starting to take advantage of the opportunities presented by a sandbox game. Actually, I'm starting to think of it as more of a Playground than a Sandbox, a concept I'll investigate more in a future blog post. They decided to pursue the most current lead on the location of the Sword of Rhogrim first, knowing only that the hero last to possess the sword disappeared while investigating a mysterious crystal dome out in the wastes, past a great stone head. 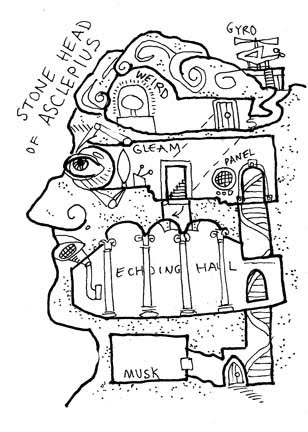 Many of the townsfolk of Majinta are familiar with the head, or the Head of Oos, as it is locally known. It is formed out of a cliffside and is some 60' feet high. After taking on some hired muscle (a couple of out-of-work swordsmen from the slave market, one of which is a "Reptelf", a race I'll detail in another post), the party ventured out the three leagues to the foot of the head. (For some reason I like that expression, "the foot of the head"). There was a clearing in the normal creepy vegetation of the wastes, likely from visiting tourists, as well as a great stone tablet covered in archaic foreign words. One of the characters (a failed academician)was able to translate, and the party flinched as the mouth of the stone head ground open.

Cautiously, carefully, the party entered, making the poor torchbearer/guide/urchin lead the way. They found themselves in a vaulted stone gallery in which every little sound echoed loudly. At the back was a spiral staircase leading up and down, and they also found the skeleton of a dwarf, and what looked like slimy trails all over the walls and ceilings (which made them very nervous). They followed the stair up, hearing a strange hissing noise that got louder as they climbed. It proved to be emanating from an odd circle of metal mesh. If they listened closely, they could almost make out the words "Mae-Dae" or something of the sort. They fidgeted with a group of jeweled studs beneath the mesh, but that only made different and increasingly annoying sounds issue forth.

Up a short stair, they arrived at a landing with a strange metal door marked with a yellow sign bearing a triangle pierced by two arrows. The door proved to be electrified, much to a warrior's chagrin! Up onto another landing, and they found themselves in front of a bizarre array of levers and buttons. Messing around with them a bit, they managed to get two large steel circles to twist open in front of them, and they found themselves looking down at the clearing in front of the stone head - they had managed to open its eyes! Just then, the cleric Deago the Unwise, notices a strange sucking sound above him, and screams as a slimy, 12' long black-and-purple sluglike creature (see stats below) with frond-like antennae squeezes out of a fissure and attacks. It shot a stomach-like, toothy appendage out of its mouth that burned through the cleric's chain mail, sunk its teeth into his chest, and started pulling the unfortunate holy man forward. The party attacked, managed to sever the things stomach-tentacle with a lucky "20", and it withdrew back into its crevasse.

The party threw a grappling hook up through the left eye of the Head and was able to climb up onto the top of the Head. Behind it, they saw another metal door, a paved (though overgrown) courtyard, and a weird chariot-like conveyance with a glass dome and five metal blades attached to the top. Inside they found an array of levers and such, and under the seats they found a white metal box, and a black metal box. The white box contained four syringes of some sort of healing potion, and the black box contained a sort of pistol like device with 6 large shells. Out to the NE, they could just make out the top of a cracked crystal dome in the distance, and they headed towards it.

They were met outside by angry beetles. They managed to flip one onto its back (more fantastic outside-the-box thinking during combat!), and kill it, and were able to slip away as the other beetles feasted on the body of their dead cousin. They climbed the dome, found the valve, repelled down into the greenhouse and started to search through the weird and often hostile plant life within.

Then they ran into the green slime! Things got very bad very fast, flesh was consumed, and it was nearly the end for them. Nonetheless, they were able to escape the dome, heal the damage they had done to themselves to get rid of the green slime with the vials from the ancient chariot, and decided they had best get back to Majinta for a little rest and recuperation. Living to fight another day. They were attacked on the way home by a Fungusbat (see below), but killed it with another surprise 20.

Looking forward to the next session!

Burjoroi
This 12' long sluglike creature is black with deep purple splotches, and has two quivering frond like antennae it uses to "see" and "smell" with. Despite its size, it can fit through cracks as narrow as 6", and is extremely stealthy. In combat, it can either spray acidic bile (1d4 points to anything fro 15' in front of it, save for half), or lash out with its toothy stomach-tentacle (1d8 dmg). If it hits by 3 or more over what it needs, the stomach-tentacle has attached itself to the victim, and will do an automatic 1d8 points of damage each round until detached or destroyed. Burjoroi are rumored to be psychically sensitive, and will seek out psychically sensitive individuals to feast upon.
HD4+1; AC5[14]; hp21; atk spray or bite; dmg 1d4 or 1d8; Special see above; Save F4.

Fungusbat
This creature appears to be a gray and green bat (with a 8-10' wingspan) dripping with moss-like fungoid growths. Its mouth is unnaturally large, and filled with translucent 9" needle-like teeth (which fetch as much as 2gp each at market, there are about 20 teeth in the average fungusbat). In place of eyes it has two black, branchlike growths that appear to detect motion or air displacement. Its bite can convey (25% chance per bite) a wasting disease that will dissolve the victim into a heap of green and gray fungus in 2d4 days.
HD2+1; AC6[13]; hp11; atk bite; dmg 2d4; Special fungus disease; Save F2.
Posted by Al at 8:14 AM