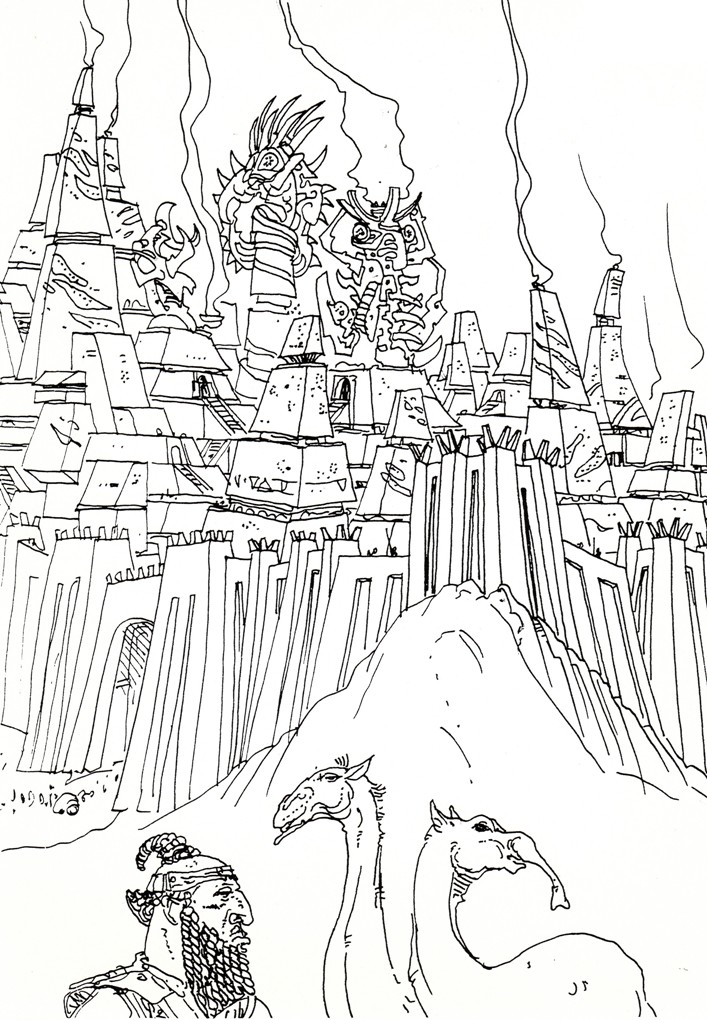 "Up the Red Caravan Causeway, through the fungus-choked Sinking Lands, and you arrive at the towering sandstone walls of Majinta: City on the edge of the Western Wastes. Beyond the city a shroud of roiling green mist hangs in the air, marking the border of the Wastes. Over the city brood the Totem-Towers of the Majintans, their black iron facades depicting the scowling faces of the city's ancient forefathers. A crowd of merchants, fighting with their stubborn, honking, pack-loros, eye you suspiciously as you near the great gates. But the glaive-wielding, insect-helmeted guards at the entrance pay you no mind - their only concern is that you hand over the silver coin required for entrance.

You've come here following rumors of the lost Sword of Rhoghrim. But the city stinks of Chaos - even the begging street urchins have an unwholesome gleam in their eyes. This is not likely to be an easy job..."

Above is the opening flavor text for this Friday's Swords & Wizardry game. As I blogged back in May (Building the Old School Group), I was puzzling over how to put together a group of like-minded old-school gamers. As fortune would have it, they were, for the most part, already right there in front of me - people I knew from work, clubs, pubs, and old gaming groups - who I knew shared an interest in, if not gaming in every case, the fantasy/scifi/horror genres in general and all they entail from movies to books to video games, etc.

Between 5 and 8 people will be showing up for the first session!

I was pleasantly surprised by the enthusiasm showed by the folks I suggested giving this a whirl - half of them have never played an RPG before, and some are even (gasp) girls! - despite my cautionary advice that they would be entering into some pretty damn nerdy territory (though I made it clear costumes would be expressly forbidden).

The game itself will be set in a new campaign setting I've been tinkering with: Omegea (the opposite of Pangea - the continents have traveled around the globe and gotten back together again just before the end of all things) - kind of a Dying Earth meets Weird World meets Melnibone meets Barsoom type of setting. Yep, dune seas, flying ships, lost technologies, weird cults, radium rifles, amorphous diabolical blobs, all that good stuff. You've seen some glimpses of it already, here and there.

At any rate, I hope it turns out good, and everyone has fun. There's a big stone head jutting out of the sulfurous peat of the Wastes, and a cracked crystal dome beyond that, crawling with nasty-looking, chitinous creatures. Just waiting for a fresh meal...
Posted by Al at 6:43 AM