Waaaaay back in 2009 I posted the original five Fighting Man subclasses. Here are three more options for your players to take their vanilla 1E, B/X, or OD&D fighters in a more focused direction.

Merchants are a lynch pin of an active, thriving world, moving goods from place to place at a time when many folks lived all their lives without ever seeing what lay beyond the milestone at the edge of their villages. Merchants are experts of negotiation, collectors of maps and lore, and always have an eye out for the next big opportunity. They also tend to be jacks-of-all-trades, picking up many skills and languages along the way.
Prerequisite Ability: Cha 13+
Languages: Merchants begin play with one bonus language and add another at each odd-numbered level thereafter (3rd, 5th, etc).
Uncanny Trader: Merchants have a knack for getting the most out of a deal. They know how to get more coin when selling, and spend less coin when buying. This bonus is equal to 5% of the price (for sale or purchase) per level of the Merchant. For example, the 4th level Merchant makes 20% more when selling goods, and spends 20% less when buying them.
Traveler's Lore: Merchants have a 20%, plus 5% chance per level, to read languages, decode cyphers, and interpret obscure maps.
Magic Dabbler: A 5th level merchant can use magic as a 1st level Magic User, and gains a spellbook accordingly. 9th level Merchants cast spells as 2nd level Magic Users, and 13th level Merchant Princes cast as 3rd level Magic Users.
Shun Armor: Putting in long hours on horseback or at sea, Merchants do not often favor the use of heavy armor unless absolutely necessary, and customers tend to balk at the sight of it. Merchants cannot use their Uncanny Trader or Magic Dabbler abilities when clad in anything heavier than leather armor. 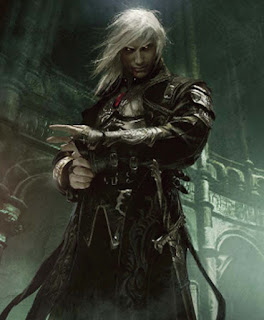 Eldritch Knights are warriors who employ the arcane arts to enhance their fighting abilities. Legends claim elves were the first to do so, but today warriors of all races may practice the art, provided they have mental mettle as well as physical.
Prerequisite Ability: Int 13+
Spellcasting: Eldritch Knights begin to add spells to their arsenal at 1st level, and progress every 2 levels after. So, a 3rd level Eldritch Knight casts at 2rd level, 5th at 3rd, 7th as 4th, 9th as 5th, 11th as 6th, and so on. They gain a spellbook as a Magic User does, and must use components as they do.
Limited Arms: Learning to cast while armored takes years of training and focus. 1st level Eldritch Knights can cast in Leather, 5th level in Chain or lighter, and not until 9th level and higher can they finally cast in plate mail. Also, one of the Eldritch Knight's hands must be free to cast spells, so shields and 2-handed weapons seldom see use by them.
Lightning Reactions: Once per day, an Eldritch Knight may use his weapon and a spell in the same round. This ability increases to twice a day at 5th level, and three times a day at 9th level.
Touch of Steel: Eldritch Knights can deliver spells that normally require a touch (such as shocking grasp) with their weapons, in addition to normal damage. 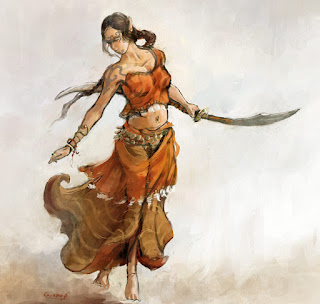 Dervishes are skilled warriors, usually from exotic places, who focus on speed and agility to enhance their fighting skills, rather than brute strength and steel armor. Dervishes are highly sought after as bodyguards and prize fighters. Their distinctive fighting style of whirling and leaping allows them to engage in combat unarmored, and strike multiple times with their flashing blades.
Prerequisite Ability: Dex 13+
Unarmored Defense: Dervishes can never wear armor (though they may use shields), instead, they wear loose-fitting, flowing clothes made of linen and cotton that confuse an enemies blade as they twirl and leap. Armored dervishes lose all their special abilities. At 1st level, an unencumbered, unarmored Dervish has an Armor Class equivalent to leather armor. At 5th, she has an armor class equivalent to chain mail, and at 9th, an armor class equivalent to plate mail.
Whirling Blades: A dervish armed with a light weapon, such as a scimitar, hand axe, or spear, can make more attacks than their slower counterparts. A 1st level a Dervish attacks thrice every two rounds, twice a round at 5th level, and thrice per round at 9th level.
Unwavering Focus: A Dervish reduced to 0 or fewer hit points during combat will go into a sort of trance state, allowing her to continue fighting for 1d3 rounds after. 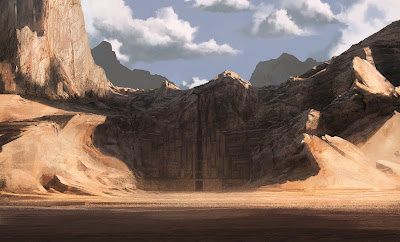 Of course, every good campaign setting deserves a tentpole Megadungeon. For Atheon, I wanted my Megadungeon to tie in with the mythology of the setting.

On the northern edges of Atheon, at the feet of the Azar Mountains and past the ruins of Fallen Abydo, lies the Valley of Judgement, within which lies the great black heap of Azag Mozu. The origins of the place are lost to the mists of time, but it was said to have been a great black finger of stone, a thousand feet across and more than a mile high, that jutted up from the red earth like a dagger jutting from the back of a god. This is where the name Azag Mozu came from - "Obelisk of Death" in the Old Tongue of the Makers. 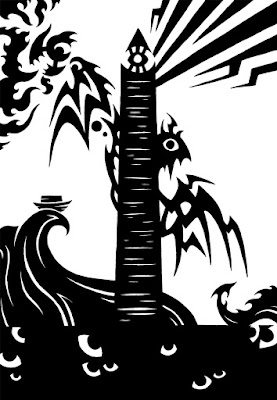 A Dark and Troubled Time

For a long while, the Azag Mozu was a site of pilgrimage, and the faithful of many gods, not just Mozu, going to pay tribute at this marvel of supernatural wonder. But at some point, something awakened within Azag Mozu. Something dark, something the dreamed of conquest. Fell hordes of creatures, many never seen in this world, issued forth from unseen gates. First they ravaged the once great city of Abydo, the center of trade and power between the holy lands of the southern rivers and the trackless forest realms of the north. The city was crushed, hundreds of thousands died, and it is said one hundred and thirty thousand souls were marched off as slaves to disappear into the Azag, never to be seen again.

After this, the hordes began to move further south, into the fertile flood plains of what would become Atheon. In a rare show of unity, the heads of the Eight Temples met with the heads of the three great Houses of Sorcery, and all bowed the knee to the legendary warlord Haga Nurald, then only a young man just come into his prime. The host of Atheon fought back the horde, until at last a great battle raged across the Valley of Judgement to the very foot of the Azag.

It is said during this battle forces were unleashed that have never been seen in this world before or since. Gods and their angelic knights walked the earth in plain view of Men, and fought shoulder to shoulder with them against horrors from beyond the Walls of Night. Unheard of Sorceries shook the Valley of Judgement (indeed, it is said this battle is when the priests of the Eight first began their long mistrust of wizardry), and martial heroes of unmatched prowess matched blades with unholy warriors of diabolic aspect. Haga Nurald himself slew, singlehandedly, a massive Wyrm composed of fire and shadow.

At last, the tattered remnants of the horde fled, throwing the gates of the Azag closed behind them in their terror. Then the earth gave out a great rumble as the joined might of the gathered priests and wizards threw down the Obelisk of Death into a great heap of tumbled black stone. It is said dust hung over the valley for seven seasons before settling at last. 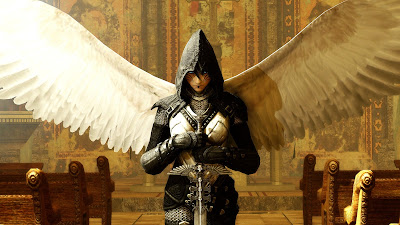 After being shunned for centuries, Azag Mozu has now begun to draw visitors once more. Some go, as in the past, to marvel at the sight of the heap, ruined as it is, or to give praise at this visible evidence of their gods' power. Others go out of curiosity, as Atheon's long peace has lent itself to the pursuit of scholarship and sciences. Still others go for less altruistic reasons - treasure is said to lie in the deep vaults beneath the heap, in subterranean halls that somehow survived the collapse of the Mozu.

And, it is whispered among the caravans that even now ply there ways northward, no few explorers have ventured into those halls never to be seen again...


In the next part, I'll take a look at the Megadungeon itself, its environs, and the tools I'm using to build it.
Posted by Al at 7:50 PM 13 comments: