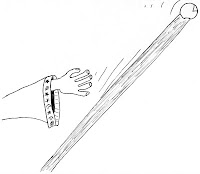 I took a drive west down the ever-entertaining I-90 into Pennsylvania Saturday to check out the Erie Day of Gaming. It was a nice little convention, no nonsense, just folks at tables playing and learning games. I got to talk shop with Rob Conley for a while (who has a nice surprise for you Wilderlands fans forthcoming!) before rolling up a character and joining Joe and Tim for his noon game, a playtest of Tim's forthcoming C&C adventure, run with S&W liberally houseruled, almost Arduin style, with stuff from Rob's own Majestic Wilderlands.

I ended up with Jex, a Mage of the Order of Thoth (fans of the City State will no doubt be familiar with the massive temple of that order). Jex and his companions, a berserker bodyguard and a priest. We set out in search of a missing Thothian brother and became embroiled in a little village's pollution issue, ending up venturing into a mine. Spell selection is everything in old-edition D&D, and Jex... chose poorly. He entered with a full complement of mind-bending spells guranteed to let him master any mortal foe, only to face wave after wave of mindless undead!

Fortunately, Jex was, albeit unknowingly, equipped with a potent magical artifact: the Staff of Flying! Upon a roll of a natural "1", this powerful stave flies off in a randomly determined direction, to lie undisturbed in a far corner of the chamber, ignored by all until the end of combat. Through some lucky rolling, Jex got to enjoy this puissant ability about seven or eight times over the course of the adventure.

Sans both spells and staff for most of the adventure, Jex was left to improvise as he could, which enventually paid off: a well-timed foot slid out into the path of the fleeing bad guy at the climax of the adventure sent him (triiip!) sprawling onto his evil face, leaving him vulnerable to the violent attentions of the two berserkers. Town saved, staff collected, shoe inshrined for future generations to marvel at. :)
Posted by Al at 6:36 AM