Anaxophis - Scourge of the West 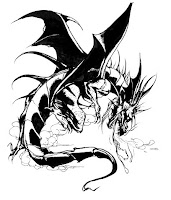 Ages ago, in the Time of Legend, the Tyrant God unleashed five great dragons from his unholy Deepforge upon the world. Of the five, only one is believed to still exist: Anaxophis, known as the Scourge of the West. To the Ancients, Anaxophis was a name to inspire terror, and its deprivations are recorded in many of their darkest Sagas. The great hero, Gar Garash, known as Ironhand, sought out the beast centuries ago, carrying with him the great blade Artefex. Neither was ever seen again.

Today, rumors have drifted from the western borderlands that this ancient terror is stirring again from its last known lair, the ruins of the Night Citadel, last stronghold of the extinct race of Nef'Larim, which perished after a day and a night of flame and terror. What has stirred the dragon from its slumber is unknown. If true, it will be the first time the dragon has been seen since the cataclysmic seige of the Gates of the Forsaken Halls over a century ago.

Anaxophis appears as a dragon of the largest size, with metallic-looking scales of black iron that gleam like silver at night. It possesses a vast intellect, a legendary capacity for cruelty, and an unsurpassed arrogance.

Anaxophis' breath weapon is a cone (120' long, 30' wide) of acid that combusts upon contact with open air. This fiery breath does damage as normal for the first round, but will continue to burn and eat away any substance it has coated, causing 1d6 damage for 2d6 rounds after. Living creatures may spend a round rolling, disrobing, etc to stop this damage, but it is difficult to remove the substance from inanimate objects, so this attack often permanently ruins all it comes into contact with, such as armor, or cities.

It is possible that the dragon's hoard (rumored to be in excess of 100,000gp total worth, not including items of a magical nature) still contains the legendary sword Artefex: a +3 Two-handed sword with a pommel and crossguard resembling the head and wings of a Great Heron. The sword's blade is made of a silvery, unbreakable metal unkown to contemporary metallurgists, and is etched with runes from the Time of Legend. The sword is inimical to magic in some way, and allows a 2nd saving throw attempt if its weilder fails a save versus some magical effect or spell. If held, it allows its weilder to use the spells Clairvoyance and Darkvision at will, and will insantly heal its weilder as per the cleric spell Cure Light Wounds once per day if the weilder has suffered more than 75% of his total hit points in damage.
Posted by Al at 9:48 AM