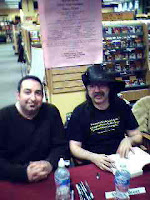 Steven Brust is the author of the fantastic "Jhereg" series of books, which follow the exploits of Vlad Taltos, a human assassin in a sunless world of Dragaeran overlords. As many fans know, the unique setting and mythology behind the novels were the result of some intense RPG sessions with like-minded creative folks, Vlad being Steven's favored character. To this day, Steven's books remain entertaining for multiple reads, and each new book further solidifies his reputation as a stalwart of fantastic literature. I got the chance to present a lighthearted series of intereview questions to Steven a while back:

BtBB: When did you first realize you wanted to be a writer?

Steven Brust(SKZB): Probably, in some sense, about as long as I was reading. I got more serious about it later, of course, but I can remember playing around with making up stories as a very young child.

BtBB: What writers were particularly influential to you growing up?

BtBB: How did you get your first book published?

SKZB: I sent it in and they bought it.

BtBB: I knew it was easy!(kidding!) Tor sure handles a lot of popular (contemporary fantasy) writers. Do they get you guys together every year for a big company Christmas Party or anything?

SKZB: No, but it sounds like a fun idea. How 'bout your house? Can you cover
air fare and hotel costs?

BtBB: Maybe Greyhound fare... Describe your feelings the first time you walked into a bookstore and a saw a book with your name on it on the shelf.

SKZB: I don't think I can describe it. It was every bit as much of a thrill
as you'd think it would be. In some sense, I'm still not over it.

BtBB: Quite a few of your contemporaries were also avid role-playing-game players. Do you think rpg's make people want to write or do writers just like to play rpg's?

SKZB: No idea. I imagine it would depend on the person.

BtBB: You've mentioned a few writers you are personal friends with. Mention a few you'd like to beat up.

BtBB: When doing interviews, what is your least favorite question ever?

SKZB: If I tell you, you might ask it, and then I'd have to kill you.

BtBB: You have quite a reputation as a fun guy to hang out with at conventions. What is it about conventions you enjoy the most?

SKZB: Hanging around with people and just talking. I also enjoy playing music at conventions.

BtBB: How about some quick fill-in-the-blanks?

BtBB: If I wrote a biography it would be about__?

BtBB: ___ will one day conquer the world?

BtBB: Don't we all! All right, last question: Many writers admit to having a crutch, or good luck charm they need to write, like a favorite pen or hat or brand of cigarette or morning ritual, etc. How about Steven Brust?

SKZB: have plenty of rituals. Cup of coffee in the right place, a good western on TV...geez. Caught up on email. I can't think of them all.

BtBB: Thanks so much more for your time, and thanks even more for all the great books! Keep 'em coming!
Posted by Al at 4:21 AM