Warriors of the Red Planet - Dungeoncrawling on Mars 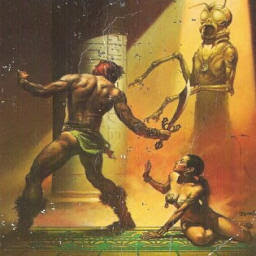 As I re-read several of Burrough's Martian books while working on Warriors of the Red Planet, I was surprised to note just how much action takes place in what we gaming fans would consider to be "dungeons". In fact, nearly every book features some sort of Underworld action. Burroughs was not alone; from the great cavern-factories of Kline to the mountain hive-cities of Norman, from a strictly literary perspective, "dungeoncrawling" seems more a part of Sword & Planet adventure than most "standard" fantasy fiction! To name a few:

The "Pits" - First introduced in A Princess of Mars, the martian gaol, or "Pits", is a maze of underground corridors and cells. Typically, these are huge complexes, but the martians seldom utilize more than a small area of them, leaving the rest to grow wild and frightening, inhabited by nameless, unseen horrors that feast upon forgotten prisoners. Most are also honeycombed with tunnels gnawed by the ulsio, the fearless, repugnant, hairless martian rat, a creature about the size of a large terrier and with the disposition of a wolverine. No prisoner may sleep peacefully in a martian dungeon for fear he will awaken with an ulsio trotting off with his arm in its mouth! Also, the gaols often feature hidden shops and laboratories, or may intersect with the buried ruins of long-dead cities.

Underground Rivers and Lakes - There are no true above-ground rivers or seas on Barsoom, but deep below ground are many tributaries leading to the River Iss, a mighty subterranian river. When the long-lived martian grows weary of the bitter struggle of life, he or she ventures into the underworld to follow the Iss to the martian paradise, the mythical Valley Dor, where they may rest amid peaceful surroundings (see Gods of Mars for more on this!). The course of the underground river is fraught with fearsome predators and natural hazards, and few indeed make it as far as Dor.

Ice Caves - The great glaciers of the north are riddled with tunnels and great caverns, many haunted by the fearsome Apt, a bloodthirsty predator. It is rumored that inhabited lands beyond the icy walls may be reached via these tunnels (see Warlord of Mars for more on this!).

Underground Cities - Some two miles beneath a great volcano lies the black underground sea of Omean, and on its shores and burrowed into its walls is the fables city of the Pirates of Mars, once rumored to come from the nearer moon of Mars. The city is a maze, with great chambers, flooded passages travelled by submarine, a great arena for gladitorial combat, sunless gardens of unearthly beauty, great temples that revolve with the passage of time, and trap-filled secret corridors and concealed doors linking every thing together. Elsewhere on Mars is a great underground city of tunnels, populated by repulsive, crablike creatures which ride headless humans like horses, and still elsewhere a buried, lost city populated by ancient undead who nonetheless believe themselves to be alive!

"Lost Worlds" - Subterranean cavern complexes and deep, shadowed valleys offer rich opporunties for the fearsome monsters of bygone ages to pick out an existence feasting on the occasional traveller or sacrificial victim. In Fighting Man of Mars, the adventure follows a cavern and underground river haunted by monstrous reptiles. Fighting through this only leads to the even more fearsome Valley of Spiders!

Megadungeon - Obviously, the potential for a Megadungeon in a Sword & Planet setting is immense, just drawing from a few resources like those mentioned above. A Martian Underworld location like Omean, perhaps a version conquered and left in ruins ages ago, to be populated only by rampant monsters, the degenerate remains of the original city's inhabitants, and the obscene, failed experiments of a mad scientist still plying his trade in the deepest Pits, would make for an immense dungeon that could span many campaigns worth of adventuring! Imagine an area like this:

Area 2.33: The Vault of Seven Chieftains -
The staggering dimensions of this natural cavern are almost too huge to define. Far above, ancient globes of irradium light still dimly illuminate the glittering strata of platinum and rubies that run through the ceiling. Opposite you, set into the wall, are forty-foot-high steel doors inscribed with the heiroglyphics of a bygone age. A crystal bubble filled with gold and silver clock-work gears joins the two doors together where a handle and keyhole would normally be set. A forest of stalacmites and stalactites obscures the far reaches of the cavern to either side of you, but you detect a hint of movement, and something dark scratches at the corners of your mind...
Nine Hrecha lurk in the far corners of the room, waiting for their master, Bors Borsinn, a 5th level Mentalist, to summon them to the feast. At even intervals around the cavern are seven crystal sarcophagi containing the perfectly preserved bodies of long-dead chieftains with faintly purplish skin (a race that died out eons ago). Their jewelled harness and ornate weaponry are worth in excess of 1200gp, but each sarcphogus is trapped with a gas that causes a slow rot (1hp per turn damage for 3d4 turns) to any standing within 10', failing a save. The bubble on the door can only be opened telepathically by reading a series of nineteen formulae inscribed upon the door. The heiroglyhics may be deciphered by a Scientist of 3rd level or higher. The skeleton of a Great Albino Ape lies just to one side of the door, covered in some faintly-glowing green fungus.