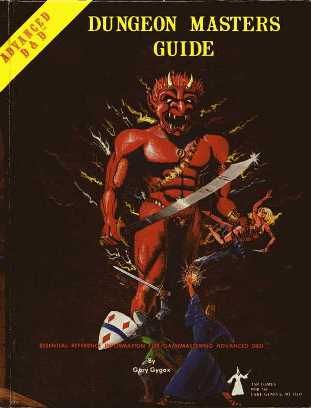 Ok, so what did you find?

Here's what I found (just flipping to random pages and reading the first paragraph my eyes were drawn to):

"Unless otherwise stated, the effects of a potion will last for 4 complete turns plus 1-4 additional turns (d4). If half a potion is quaffed, the effects will last one-half as long in some cases. Potions will take effect 2-5 segments after they are imbibed." (DMG 125)

Now, I think I knew some of that, but I definitely don't remember ever using the whole "potions will take effect 2-5 segments after they are imbibed" part. As a matter of fact, the more I read, the more I see the emphasis on segments in many of the combat rules and situational modifiers. A segment is a somewhat chimeric increment of a combat round. Ostensibly, there are 10, but there can possibly be more (especially is speed factors are being used), and what you can do in a segment seems to change according to circumstances: as above waiting 2-5 segments for that healing potion to kick in, or as in surprise getting what would normally be one or two rounds worth of spells and attacks off. This is the kind of thing I pretty much ignored way back when, btw!

Lets move along to another page.

Whoa. Now there's something I wouldn't have even thought to look for. And this from a DM who is responsible for a great many of the sunken ships dotting the murky bed of the Roglaroon Estuary. I remember vaguely scanning over some of the other ship combat rules in this section of the DMG, but again, how long it takes for a small merchant ship to burn away to chunks of flotsam is something I would normally just wing. By the way, its 2-8 turns, if you're curious. Which is far longer than I ever gave PCs to abandon ship!

Moving along to the PHB:

"Italics indicate weapon capable of dismounting a rider on a score equal to or greater than the "to-hit" score." (PHB 38)

I don't think I've ever noticed this detail, but I could be wrong. I don't remember as a player or DM ever seeing one of these weapons in use for the purpose of dismounting a mounted opponent.

But now that I am very much aware of this, I think the local orcs may be getting some new equipment...

Obviously I could go on like that for pages (and I could think of a worse weekly blog feature than "obscure AD&D random rule of the week"), but I think you get the point. And those three, at least, illustrate pretty well how all this stuff has been used at my table and others of my experience: some of it ignored in favor of "winging it", some undiscovered to this day, some tucked away into a back pocket to surprise players with later, and some deliberately excluded or vetoed.

As a matter of fact, its very easy to get the impression that most of the stuff in the AD&D books was from one of three sources: the basic game (OD&D), Chainmail esoterica that was left out of OD&D and someone thought would be a good idea to re-include, and third: every single houserule, exception, detail, and conditional modifier Gary remembered to write down during the apparent 80 or so hours a week he was DMing his campaigns back then.

Very few fundamental changes were made to the game's "core" rules, which is likely why OD&D, B/X, and AD&D stuff is so cross-compatible, and certainly why it was so easy to just ignore a good portion of the new stuff and keep running combat, surprise, movement, time, and other elements just the way we had always done with the various early boxed sets.

But that's not to say there were no fundamental changes. There certainly were, and we'll take a look at them next, as well as draw some conclusions about how they affected where the game was headed after AD&D...
Posted by Al at 6:54 AM