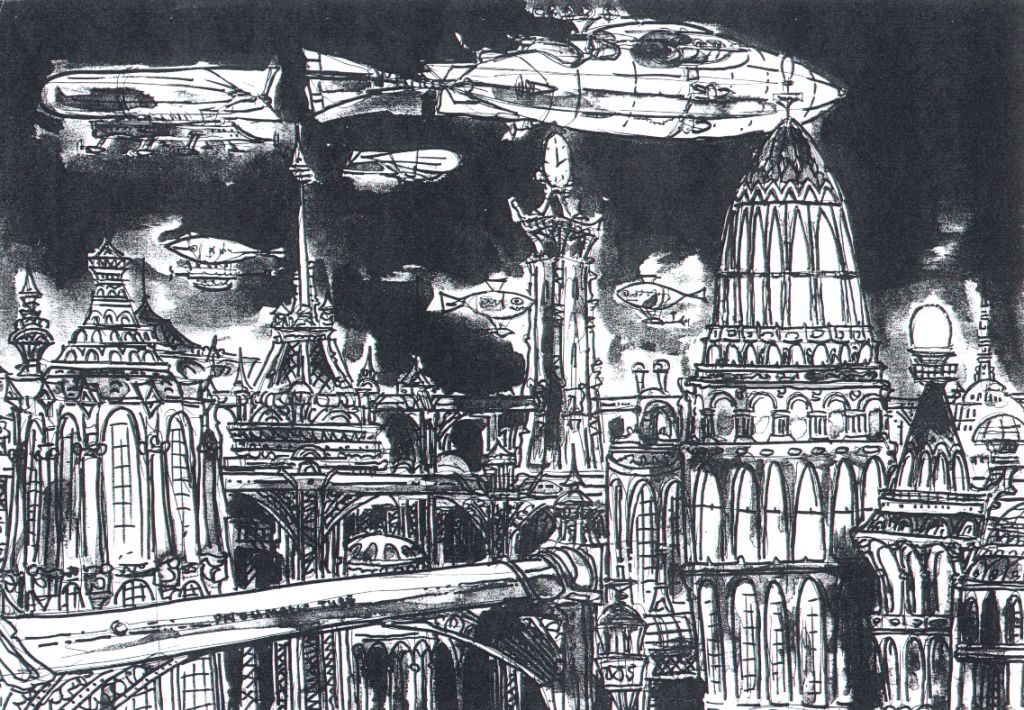 Travel far in the northern lands of Omegea, across the barren tundras and endless ice-crystal forests, until you come to the Obsidian Plain. There, in the center of all those miles of cracked, nuclear glass rises a domed city of gothic spires of black iron, massive statues wreathed in gauzy gowns of rust, soaring bridges, and yawning portals leading to vast underground galleries and railways. Above it all, floating in and out of massive windows in the milky green glass of the great dome, lurk the massive airships of the Royal Navy.

This is Prinsepia 9, greatest city of the North. Ruled for a hundred generations by the iron-fisted Toklemoria family, a rule enforced by twin hammers: the military might of the Royal Navy, and the sorcerous power of the Circle of Thirteen Quantum Uncertainties. The members of the Toklemoria family live for centuries, their lifespans unnaturally lengthened by the alchemical ministrations of the Medikos Guild.

Below the iron spires are winding, gaslit streets and alleys filled with folk in their garb of savage Gruruk-fur and jeweled weapon harness. Most favor shaved heads and eyes darkened with kohl. The gentlemen of Prinsepia 9 typically arm themselves with short swords and irradium pistols, and wear rings filled with narcotic dusts of various hues, flavors, and effects to ingest when the melancholy of the mundane threatens them with boredom. Also to be found in the streets are foreigners and lesser castes from Prinsepia 9's many subject cities, such as Arigend 4 and Palmuria 12.

Technology is the god of Prinsepia 9. Out on the tundras are many archaeological excavations undertaken by those bold enough to risk the hazards of the wastes for the possibility of the next big find, and all the financial reward that comes with it. Each unearthed secret of the ancients adds to the prestige and power of the city. Beneath the city's own subterranean galleries lie deeper chambers as yet unexplored, many crawling with the hungry spawn of earlier ages.

At the center of the city, rising out of and above the great dome, is the Observatory, a massive tower topped with an array of lenses and arcane sensors used to track the motions of the stars, which the folk of Prinsepia 9 believe influences their futures, personalities, and daily lives.
Posted by Al at 7:41 AM