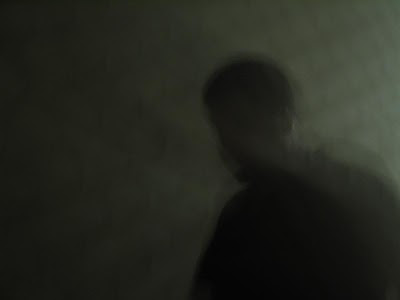 Grede
A grede is a foul spirit that lurks in the deep, dusty halls where the lines between Megadungeon and Mythic Underworld are the most blurred. Near-invisible save for a slight wavy texture in the air, like the air over bricks on a hot day, the grede lies in wait for a passing party of adventurers, and then picks the weakest-looking member to try and possess (typically a torch-bearer or some-such). Over the following days, the grede will use its possessed victim to steal from one party member or another when the opportunity arises. The stolen goods are then placed among the possessions of another party member. The grede feeds off emotions of anger, passion, and conflict over material wealth, and will do its best to procure such a meal, tending the ever-more-hostile emotions of the party as a gardener tends his garden.
A bodiless grede is harmless, and cannot be harmed, but may possess an individual in 1 round that fails its saving throw. A grede-possessed victim is unnaturally strong, and will radiate both magic and evil if detections are used. A grede may be forced out of a victim with remove curse or other such magic.
Grede (in possessed body) HD6+6; AC6[13]; dmg1d6+3; Save: F6; Special: Possession.

Gray Gorger
The Gray Gorger appears, at first, as a slim grey humanoid with joint-less, flexible arms and legs, an eyeless white face with flaring nostrils and gaping mouth, and a single glowing tentacle sprouting from its forehead. Anyone looking at the tentacle must save or be hypnotized, and stand still staring at it. The Gorger feeds on any carrion or meat it can find, including hypnotized victims, and shoves them, whole, into its jawless mouth. Each meal makes the Gorger bigger and bigger. If seriously threatened, it will vomit out the contents of its swollen guts in a 30' cone, causing anyone struck by the noxious mess to save or be rendered helpless and reeling by nausea. Victims swallowed by the Gorger take 2d8hp dmg per round.
Gray Gorger HD8; AC4[15]; dmg 1d6/1d6; Save F8; Special: hypnotism, swallow, vomit.

Blind Tinker
The Blind Tinker appears as a milky-eyed, frail-looking, gollum-like creature that carries around a massive pack of debris and bric-a-brac on its back. The Tinker collects whatever castoff junk it can find around the dungeon, repairs it, and sells it. It has a 35% chance of carrying around items lost by deceased player characters. It has a 25% chance of having any item on the standard equipment list in the PHB, and the Tinker charges 2x the normal cost. It will also repair items for 10% of their worth. If threatened, the Tinker possesses 3 or 4 bottles that, if broken, release poisonous fumes into the air that act as Stinking Cloud and Sleep (save vs. each), and will flee while the party is incapacitated.
Blind Tinker HD3+3; AC9[10]; dmg 1d4; Save C3; Special: gas bottles.
Posted by Al at 7:06 AM