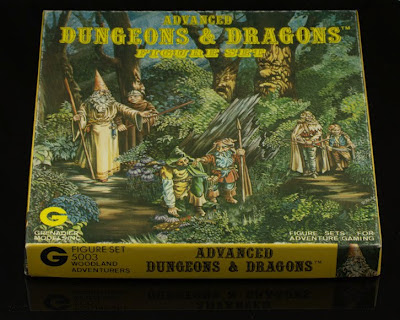 Ever since I picked the above Woodland Adventurers boxed set from Grenadier up, like a hundred years ago, I've thought it would be fun to run an all-forest campaign. A campaign where the entire campaign setting, or at least for the scope of the campaign, was forest.

It would be interesting to see characters like Rangers and Druids, who don't normally get to show off their abilities in a dungeon or urban setting, actually test out their abilities to the fullest.

There are some good maps available on the internets you could use for such a campaign, from the traditional, like this map of Sherwood, to the fantastic, like the wonderful Southern Mirkwood map by Daniel Cruger, which leaves lots of space for you to pencil in your own names and locations.

If you don't have them in your system of choice, the Ranger, Druid, all their woodsy spells and magic items, and an extensive list of Forest monsters is available for free in the OSRIC.
Posted by Al at 4:11 AM