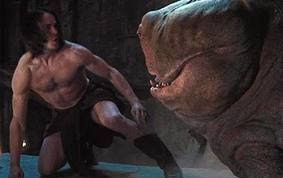 Yeah, don't read this if you intend to see the movie shortly and don't want it spoiled.

So I took my boys to see the new John Carter movie last weekend. The boys enjoyed it; I came away with some mixed feelings.

What worked: Stanton's vision of Barsoom was a worthy one. Any scene with an airship in it was simply stunning. While not hewing particularly close to the battleship-style ships I always envisioned when reading the books, the ships in the movie had a grace and presence that made me want to own one of my own! I also really liked the Green Men; I had fears of these fellows coming off as kind of cartoonish, but they didn't at all (the baby ones maybe a little) and it was nice to see their life of wandering and occupying the dead cities of mars brought to life. Our princess Dejah Thoris was wonderful, the actress playing her basically stole every scene she was in. My favorite character was Woola, who brought a much-needed buoyancy to the film (I think the boys liked him best too).

What didn't work: Basically anything they changed from the book. It puzzles me that, for all his professed love of ERB's work, Stanton felt compelled to make the story changes he did. The first five minutes of the film immediately got my hackles raised - the movie opens on Mars, not Earth, and you get some exposition about Zodanga (now a city that walks around on spider legs) and how it is ravaging Mars, and Sab Than is introduced as Chief Bad Guy, who is given (by a trio of shape-shifting Holy Therns) a Super Ray Gun to wear on his arm and shoot down airships with. When we finally meet John Carter, you realize immediately that he is no longer the possibly-immortal veteran of countless wars, but instead a PTSD'd veteran who is being beaten into submission to fight Native Americans for the US Army. John then spends most of the rest of the movie trying desperately to get back to Earth so he can reap the financial rewards of mining a cave full of gold.

This complete change of not just Carter's story, but his whole persona, just didn't sit well with me. In the books, Carter is a chivalrous gentleman and the finest swordsman on two worlds; his driving impetus is to protect and save the Princess of Mars he falls in love with. He is smart, well-spoken, indefatigable, and virtuous. Carter's "Bad Guy", in effect, is no one villain, but the harsh environment and characters of Mars itself, and Carter will overcome them all to save the woman he loves. In the film, however, Carter is a sullen, withdrawn, beaten man who expresses such disinterest in Dejah for most of the film you wonder why he ever bothers to rescue her from marriage to Sab Than. He's not even a particularly good fighter - Dejah seems to be better at swordfighting than he is. Carter does have one big fight where he piles bodies around himself, book-style, but the film makes it clear this is because he has gone into a PTSD-fueled berserk rage while he envisions the death of his wife and child back on Earth (didn't know he had a wife and kid, did you?).

Now, I hate to even speculate on the sexual politics involved in these character changes. On the rare occasions a male character is allowed to be both strong and smart in a Hollywood film, you usually get a villain, or someone with a tortured past (ala Watchmen's Ozymandius or Batman). In this film, the John Carter of ERB's novels loses a small helping of strong, a big helping of smart, most of his honor, and all of his love of fighting. Thanks to a misunderstanding of language, the Tharks continually call Carter by the feminine name of "Virginia", which became less and less inappropriate as the film went on. Stop sulking, John!

After a couple of days pondering the changes of the film to the book, I'm left wondering how much was due to the screenwriters' feeling they could tell a better story, how much was what they felt necessary to translate the book to screen, and how much was simply necessitated by the need to be politically correct?

And, to be fair ("reader beware"), how much does my dissatisfaction with the film have to do with the film itself or with my own vague deflation at seeing one of the fictional role-models of my boyhood neutered on the big screen?

I should mention that, if you're a fan of Ancient Aliens, you will realize Stanton or one of the screenwriters is, too. Oh, and where the hell was the Atmosphere Factory?

Lest you think I hated the film, I did not; not by a longshot. I've read a few reviews claiming John Carter was "not as good as Avatar", which is not only laughable considering Avatar's source material, it is patently untrue, at least in my opinion. Its an enjoyable movie that I'll no doubt see again, possibly even in theaters. And I'd certainly see any sequels - now that John has overcome, on screen, the unfortunate revisionist backstory he was saddled with, perhaps he can get back to gleefully kicking ass with both sword and mind, and the original story lines of the subsequent books GoM and WoM, which have more clearly delineated villains, can be more closely adhered to.