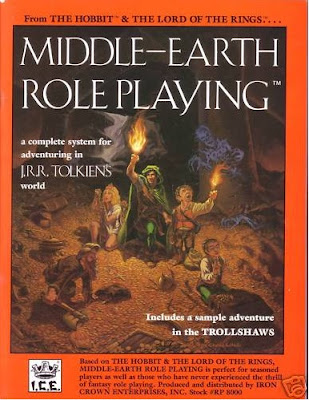 Of all the RPGs I've played over the years, one of the most memorable was MERP, Iron Crown's Middle-Earth roleplaying system, based, of course, on Tolkien's Lord of the Rings. Effectively, it was a "rules-lite" version of ICE's flagship Rolemaster system. It capped out at 10th level and had a more limited selection of classes, spell lists, and critical hit charts, all admirably geared towards bringing Tolkien's world to life at the gaming table.

I played the game over a 2-month summer break with three guys I was introduced to at a local game store, one of the few I ever recall being in a shopping mall. Remembering back, it seems more like we played for years than just 8 or 9 weeks, but those of course were the summer days of youth, which we all know work on a wholly different time scale than we experience today as adults. We played enough to max out our characters at 10th level, before Fall and the impending school year split us all up, never to meet again.

In those two months, we had a pretty great campaign, set in the "Fourth Age", some years after the War of the Rings, with the emphasis on clearing up "loose ends" left by the books. We plumbed the desolate ruins of Angmar and Dol Guldur, explored the wastes of Eregion in search of lost Ring-lore, cleared Shelob's growing brood from the tunnels beneath Cirith Ungol, and even delved into the forsaken halls of Mordor on a mapping mission to pave the way for Dwarven recolonization.

Since there were only three players, the GM allowed us to roll up two characters apiece. I went into it hoping for a sort of Aragorn/Gandalf duo, but the GM had us roll our homelands randomly, and I ended up with two Black Numenoreans! These, of course, were the evil refugees of Tolkien's sunken Atlantis-like island who had given their support to Sauron (like the "Mouth of Sauron" character from the books, for example). It was an interesting challenge; I had no interest in playing villains or anti-heroes in those days, but being "forced" into the role gave the characters a lot more depth, and some interesting dilemmas and prejudices to deal with as they interacted with the other folk of Middle Earth.

Mechanically, the system was easy to run, as I remember it, which was not to be my experience later on with the game it was derived from: Rolemaster, which I found to be a confusing, arcane rule set of nearly endless complexity. Combats were quick and deadly, highly entertaining (with the crit charts frequently dealing out fun stuff like arrows through the eye and severed noses), and the spell system was engaging. Casters had a pool of spell points to draw from (and, hopefully, a couple of magic items to increase that pool of points), and lists of spells. Casters learned new Spell Lists as they advanced, and each level gained also granted more access to the spells in those lists. Most resolution rolls were made with percentile-dice, such as finding traps, sneaking, or fighting, and agile characters had a score that could be subtracted by the enemy's chance to hit. Multiple attacks were available by splitting your percentile chance to-hit in half, for instance, if you had an 80% skill in "broadsword", you could make two attacks at 40% each.

I can't for the life of me remember the name of my sorcerer, but I do remember my warrior quite well: "Gorum the Butcher", as this would also become the name of my long-running online Neverwinter Nights character. Interestingly, one of the core deities of Pathfinder's Golarion setting, the god of War in fact, is named Gorum, and I like to allow myself the conceit that this warrior of mine from the 80's finally achieved apotheosis.
Posted by Al at 7:39 AM