Now that I have Atheon's pantheon sorted out, I want to take a look at how religion plays a part in the structure of the campaign setting. I want religion to really be the driving force in the setting, and since this is a fantasy setting, I can expand this from the spiritual realm into the magical one. With this in mind, as far as the majority of Atheon's populace is concerned (or indoctrinated), magic is a divine gift, and magic that comes from any other source (such as sorcery) must be Blasphemy.

Magic is Blasphemy!
This idea of magic being "legal" for only clerics can become a cornerstone of the setting. For Atheon, I decided there was a great uprising against Wizards a century ago, during which wizards, sorcerers, and druids were hunted down and either killed or exiled. The great wizard schools were torn down and burned. To this day, wizards exist in Atheon only by keeping a low profile, or by serving a powerful patron such as a local Prince or High Priest. Low-level PC wizards will need to be cautious about when and where they display their powers, lest they be dragged to the town square and have their limbs tied to camels driven in opposite directions.

The Great Old One
I mentioned in the last post there is a Ninth God. This is Goru Dara, Master of the Impenetrable Void. The god appears as a male or female body with a head composed of a blank space or star-filled void. The god holds a black staff which is said to unravel the material fabric of any object or creature with the slightest touch. Goru Dara is the source of Warlock magic in Atheon, and the religion's rising popularity and power is what precipitated the massacre of magic-users a century ago. Today, it is rumored the religion still exists, albeit in hiding, and its practitioners even now plot their return to power... 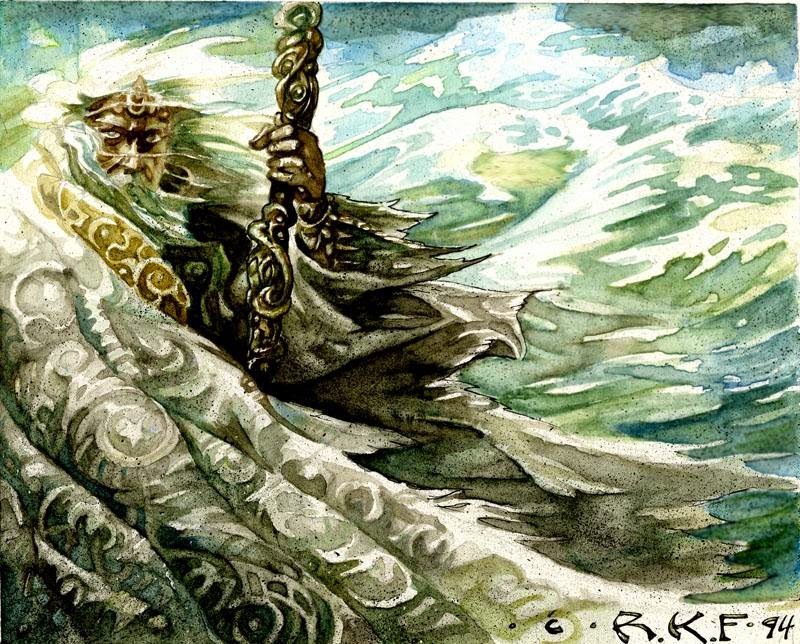 The Last Archmage
Depending upon whom you speak with, there is one rumored/known powerful survivor of the great massacre a century ago. This is Amhuuriad, the Last Archmage. Among those who practice magic in secret today, he is known as "the Betrayed", for it is said that he aided the Eight High Priests of Atheon in the destruction of the foul temples of Goru Dara, only to have the Eight turn on him and his fellow wizards. Amhuuriad alone nearly defeated the combined might of the Eight, but in the end he was forced to flee into the trackless wastelands out beyond the river valleys. It is said the immortal Archmage lurks the fringes of Atheon to this day, working quietly to restore his art to favor, and offering wisdom to heroes in times of need.

Alignment in Atheon
You may have noticed that while each deity received a description of his or her clergy, temples, and even material form, there was no discussion of alignment. It has long been a conceit of D&D that gods have alignments, and clerics of those gods adhere to those alignments strictly, or face consequences. Instead of this, I want the priests of Atheon to choose their own alignment just like anyone else - I'm hoping this will lead to a lot more story opportunities. Perhaps there are conflicts within the church as to how refugees from a neighboring kingdom should be treated, or intrigue as high-ranking priests of a temple try to outmaneuver or even murder their more virtuous counterparts. Clerics in this setting will need to focus on their god's domain rather than alignment in order to receive their god's favor.

Next time, we'll take a look at Atheon's Megadungeon, Azag Mozu. Because you knew there would be a Megadungeon, right?