Designing a campaign world - pt. 2: the Gods of Atheon 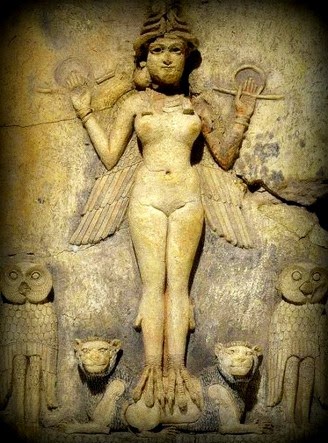 Religion, for me, can go either way in a campaign setting. In more Sword & Sorcery - flavored campaigns, I typically don't put a lot of emphasis on the gods, there are hundreds if not thousands of them in many such settings, but the trade-off of such profligate deities is a drastic lessening of their overall influence. For Atheon, I want them to play a much bigger role, part of the warp and weave of my setting's fabric.

Since I'm making the setting specifically for a (potential) future 5E campaign, I'm basing the gods on the eight domains D&D currently offers: Knowledge, Light, Life, Tempest, Nature, Trickery, War, and Death. There is a ninth god as well, but we'll discuss him later. So here's Atheon's pantheon of deities:

Izkalal (Knowledge) - Also known as the Master of Tomes and the Old Ibis, Izkalal appears as an old, bearded man clutching an Ibis-headed staff in one hand, and a bronze-covered tome in the other. He is the patron of learning, of libraries, and of the sciences. His priests practice fanatic austerity, and dress in simple white robes hemmed in runes of brass thread. There are no true formal temples to Izkalal, per se, though all the great libraries of Atheon possess a chapel in his honor.

Nabara (Life) - Also known as the All-Mother, or Mother of Mothers. She appears as a curvaceous woman of fertile age with angelic wings and bearing her holy golden sickle in one hand. She is the patron of Fertility, Food, and the flood and fall of Atheon's rivers. Her clergy is predominantly female, and wear diaphanous robes of white and silver gossamer. There is a militant wing of the clergy known as the "Arak-Nar" (or colloquially as Spear-Maidens). It is considered a great crime to harm or otherwise molest a priestess of Nabara, as the withdrawal of their favor can result in blights and starvation for entire regions. Her temples are great domes, built over natural springs when possible.

Sinma (Light) - Also known as Lord of the Sun, Nightslayer, and the Shining Man. He appears as a young golden-skinned man with golden wings. He holds a rod of pure light in one hand, and a golden circle in the other. Occasionally, he may appear as a golden eagle, or as a male sphinx. He is considered by some to be the brother of Nabara. His temples feature great amphitheaters open to the sky and ringed with monoliths that mark the movements of the sunrise and sunset year-round. His priests typically wear bronze scale and robes of blue and bronze, and each bears a branded symbol of the sun on his forehead.

Myli (Tempest) - Also known as Stormrider and Lady of Deep Waters. She appears as a green-skinned female with the lower body of a sea-serpent and holds a long-bladed spear. She is the patron of sea travel and succor from storms. Her temples are typically galleries of green or blue stone featuring a statue of Myli at one end in the center of a ceremonial pool or fountain. Her clergy wear scale mail chased in silver, and robes of pastel green and blues. They are typically shaved completely hairless, and many paint a series of runes on symbols on their flesh. Worship of Myli is, understandably, much more prevalent in the coastal regions of Atheon.

Saba (Nature) - Also known as the Summer King. He appears as a strong, bearded man wearing the hide of a bear. He carries a bow and a sheaf of arrows, which are said to give life or death at his whim, and he is flanked by a pair of great lions. He is said to take Nabara as his consort in Spring and Summer, and Myli in Autumn and Winter. Vines and blooms spring from the earth where he treads. His clergy has no real standard dress code, but all carry his symbol, a man's face surrounded by vines. He has no formal temples; his faithful gather a natural landmarks such as small forests, oddly shaped rock formations, and oases.

Eretu (Trickery) - Also known as the Laughing Prince, or Prince of Mysteries, Oathbreaker, Dreamwalker, and Lord of Grapes. He is the patron of dreams, wine and song, of revelry, of luck and of bravery. He appears as a lithe young man just out of boyhood, wearing only a loincloth and wreathed in grape vines. He carries a bag in one hand, and whatever tool he needs for his mischief may be conjured from the bag at whim. It is said all birds serve him and act as his messengers. His symbol is a crook-tipped rod of silver entwined with gold, and clergy bearing this rod are entitled to free room and board wherever they travel in Atheon. His temples are round galleries of stone, and these host an annual "Night of Masks", a popular festival in Atheon.

Ephus (War) - Also known as Prince of Blades, War-Crow, and Herald of Mozu. He is the patron of war, warriors, and victory in battle. His temples are marble galleries with red floors and black ceilings adorned in the bones of the faithful. Ephus appears as a powerfully built man in armor with a red cloak. He carries a spear in one hand and an axe in the other, and his face is always obscured by a full helm. His clergy celebrate battle as holy, and often serve as mercenary forces when the temple is need of funds.

Mozu (Death) - Also known as the Lady of Graves, Soultaker, and Mistress of Night. She appears as a beautiful woman with pitch-dark skin and white eyes, wrapped in a white shawl. She holds knife and one hand, and a scroll in the other, where it is said the fates of all men have been scribed. Her temples are typically underground galleries kept in near-complete darkness, and her clergy wear robes of black and ring their eyes and mouths in kohl.

Next time, we'll learn about the Ninth God, and the place of religion in the setting, as well as its relation to the nature and practice of magic.
Posted by Al at 5:12 PM