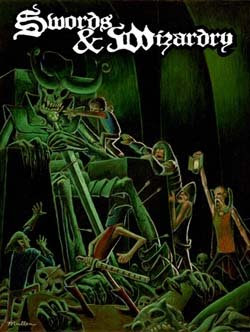 Looks like Swords & Wizardry is teaming up with Frog God Games (the current incarnation of old-school vets Necromancer Games) to bring classic gaming fans a whole lotta new adventures and other goodies.

"Frog God Games, the successor to Necromancer Games, is pleased to announce that effective immediately, Mythmere Games, headed by award-winning author Matt Finch, will be joining up with the Frog God Publishing team to produce even more of the true old-school gaming resources that Necromancer Games and Frog God Games have always been known for...

Frog God Games will now produce game supplements for both the Swords and Wizardry™ game and for the Pathfinder Game™ (published by Paizo Publishing of Bellevue WA).Swords & Wizardry builds and supports free-form role-playing games.That is to say, games where “light” rules create a framework instead of trying to cover every detail, every rule, and every situation. Over 30 books are currently in production for release in 2010 and 2011."

More at the link.

Update: Looks like charioteer Denis Sustare is on board with this too. Also, an expanded revision of the Swords & Wizardry core rules.
Posted by Al at 12:05 PM