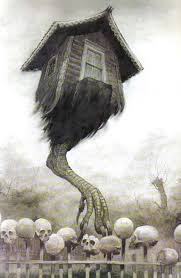 In 1979, TSR released the Dungeon Master's Guide, a hardcover tome packed with referee info, including a nice selection of magical artifacts. One of these is the infamous "Baba Yaga's Hut".

Obviously, this "artifact" is a bit different than your run-of-the-mill magic sword. What does one do, exactly, with the giant, chicken-legged, mobile hut of a notorious witch? And who is Baba Yaga, anyway?

"In Russian tales, Baba Yaga is portrayed as a hag who flies through the air in a mortar, using the pestle as a rudder and sweeping away the tracks behind her with a broom made out of silver birch. She lives in a log cabin that moves around on a pair of dancing chicken legs. The keyhole to her front door is a mouth filled with sharp teeth; the fence outside is made with human bones with skulls on top — often with one pole lacking its skull, so there is space for the hero's. In another legend, the house does not reveal the door until it is told a magical phrase: Turn your back to the forest, your front to me."

Baba Yaga seems to have not been necessarily good or evil, but rather acted upon her own whims or mysterious motives. This, in my opinion, makes her the perfect sort of NPC to involve in a campaign. Nothing is taken for granted, and any aid given by this entity may perhaps be balanced out by cooking the party thief for a nice luncheon.

Mobile huts, of course, were not unknown to the nomadic folk of the Russian steppes, though they were moved about by more mundane means. But the concept of this powerful, enigmatic force for Chaos is an intriguing one to me, made all the more accessible to just about any campaign setting or world by the fact that the PCs don't necessarily have to stumble upon her - she can come to them!
Posted by Al at 9:48 AM