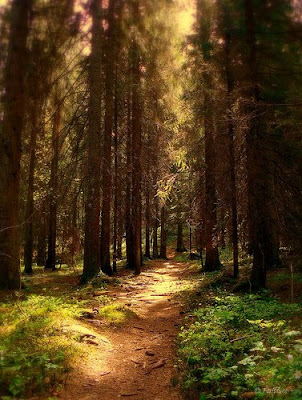 The Gnarley Forest is a vast woodland extending for hundreds of miles from the southern shores of the Dyr Dvv all the way into the battle ravaged Pomarj. This write-up deals with the NE section of the forest know locally as the Twisted Wood or Moaning Deep. This is the area of the Gnarley bordered on the north by the Velverdyva and on the east by the Selintan. The trees of the forest are black wood with deep purple or dark crimson leaves, and many are twisted into almost human shapes, contorted as if tormented. When breezes blow through the trees they create an unnerving moaning sound, especially intense after dark. A few tribes of woodsmen live in the Moaning Deep, hostile to outsiders and devout followers of the Old religions of blood and stone.

Bloodvine Vale - This area of the Moaning Deep is plagued by smothering vines with sharp crimson thorns, which seem to reach toward living creatures when their attention is elsewhere. A great ruined castle lies in the heart of the vale.

Ravine of Staring Statues - This deep, dark ravine is terraced on all sides, and a menacing, icy-cold creek runs down the center until it disappears into a yawning crack in the rocky earth. The terraces are lined with rusting iron statues of human figures which stare upwards at the uncaring skies above.

Wicker Hills - This row of four long hills lie on the border of the Moaning Deep nearest Dyvers the Wicked. Atop each is a great Wicker Man, which the woodsmen fill with criminals and captives each season and burn in sacrifice to their cruel gods.

Old Henge - This center of worship for the woodsmen is the haunt of a circle of grim druids and their fey acolytes. Thirteen mildew-streaked menhirs stand in a semi-circle here around a bloodstained stone altar.

Melting Caverns - Near the center of the Moaning Deep is a broken hill with many dark caves leading into the Melting Caverns, a series of natural chambers filled with weeping fungi and slime. The caverns are haunted by all manner of carnivorous jellies, oozes, and puddings, and is the source of the Silthering Trackers that infest the Gnarley. Rumor has it a great golden statue of alien demeanor squats in the deepmost chamber.

Kraken Tree - This massive black tree, the size of a small citadel, sits near the western edge of the Moaning Wood, its twisting trunk forming many natural arches and alcoves. Some of these lead into a great hall beneath the tree, the abode of the unnatural and cruel aelfs that hunt the wood for human victims to take part in their games of dark whimsy. The Hall is said to be far larger than should naturally fit beneath a tree of even the Kraken's proportions, and is ruled by an Aelfen queen of infamous sadism.

Creek of Time - No one is sure exactly where this creek lies within the wood, possibly because the slightest touch of its icy water causes one to lose all past memories.

The Tower of Eyes - The location of this tower seems to change upon the whim of its master, the inscrutable Sage Menek Voht, a diviner and oracle of great power.

The Silent Halls - Once a lively underground city of gentle, inhuman craftsmen (known by some as "gnomes"), the tunnels and chambers now lie silent and barren, filled with the bones of their former masters. What doom befell this gentle folk is unknown, but rumors persist of undiscovered treasure vaults filled with master-crafted jewelry and baubles.