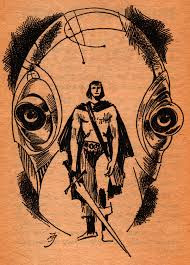 4 Items to add a dash of Sci-Fi to your fantasy campaign.

Next time your players face off with a hideous abomination like a Black Pudding, or Owl Bear, or somesuch, let them know there is a square, golden, shield-sized panel encrusted with multi-colored, flashing gems of various sizes. The shield does not radiate magic. It slowly stops flashing as the creature it is attached to dies. The players will likely take the item with the intent of exploring its possible uses or selling the gems. The shield's true purpose is to turn a human into an abomination in 1d6 days, and it will lash out at any humans nearby once the transformation is complete before returning to guard whatever location the first abomination was guarding. What lost alien race created the item?

This item appears to be a 12' long lance made of some lightweight black metal (a type of aluminum) with a pointed end flanked by two sharp flanges, giving the tip a raven-like appearance. Four thumb-studs are visible next to a rubbery handle-grip further down the shaft. Depressing a button causes a blast of energy to emit from the end of the Lance (Lightning, Cold, Fire, or Radioactivity depending on the button pushed) which causes 6d6 points of damage in a cone up to 120' long and thirty feet wide. Only 3d5 charges remain in the Lance. The Lance was used by a famous, long-dead hero of old to defeat a great demon. The Hero claimed he was given the Lance by an angel that had descended from the heavens in a fiery chariot. The Lance now stands forgotten, along with a suit of normal plate mail, in a dusty corner of the local museum.

What at first appears to be an elbow-length, chainmail gauntlet is actually made of some lightweight cloth. The cloth is covered in strange, neat-looking heiroglyphs of unknown origin. It only has three fingers and a thumb, but a human can cram two finger into one space without too much discomfort. The Guantlet is indestructable for all intents and purposes, and can therefore be used to reach into fire, acid, etc without harm. It can also be used to block blows in place of a shield (treat as non-magical shield +1). The Silver Gauntlet is found on an odd looking humanoid, possibly some sort of mutated orc or something...

This appears to be an animated stone statue about 2' tall of a man with a large head and small body (see Moai of Easter Island). It is, in fact, a living, immortal, intelligent, alien being (though silicone-based rather than stone). It's name is "Aahxa", and this is the only word it can speak (and it certainly does love to speak alot "Aahxa, Aahxa, Aahxa!"). Aahxa is typically found locked in a treasure vault or down in a pit trap, hoping someone interesting will come along and rescue him. He will then travel around with his rescuer for a while, causing mischief at times, helping out at others. He is very wise, and very old, though he has difficulty imparting his wisdom ("Aahxa!"). Its possible that at some point a fiery chariot may descend from the sky to take Aahxa back to the stars. He's pretty good at climbing walls, sneaking around, solving complex puzzles and riddles, and is immune to damage from fire, poison, electricity, acid, cold, and slashing or piercing weapons. If harmed, he regenerates at a rate of 1hp per turn. HD4; hp20; AC0[19]; Atk 2 fists; dmg 1d6 each; Save F4.
Posted by Al at 7:42 AM