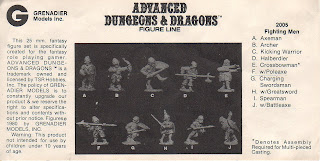 I'm often pondering unusual or interesting possibilities for a campaigns, be they big or mini. In this case "mini" is apt, because I was thinking it would be cool to take a box of mini's like the above Grenadier Fighting Men set (or maybe a big box of these guys), hand them out to the players (splitting them up evenly so each player has 2-4 minis), and have them roll up characters based on those minis. Then give them a few Fighting Man missions, like "wipe out the border fort", or "sack and loot the Frog Temple", or so on, and watch the body count rise! Heck, you could just throw them all in a longboat and let them ravage the coast as much as possible before the Dark Lord catches up with them. Any setting would do, but the idea of this in the Wilderlands or Sword & Sorcery Baltic seems particularly appealing to me.

Just to be clear, I'm not proposing a campaign without other classes, just that those classes are exclusively NPCs.

Wiping out the option to play three other main class types (Magic User, Thief, Cleric) makes for some interesting paradigms. Magic spells will be solely the purveyance of those foul, evil, Fighting-Man-hating wizards. Clerical healing won't be there to fall back on - every single wound will suck and should be avoided at all costs. Traps will be detected not by the party scout, but by the first guy in line who gets chopped in half, falls into the crocodile pit, blows up, etc.

Sounds fun to me; to play or to run. Ever try anything like this?
Posted by Al at 9:47 AM