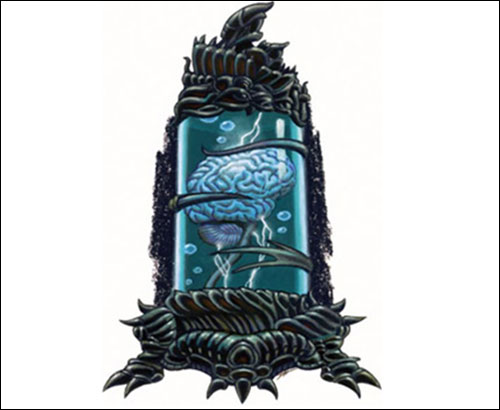 Session 4 of Omegea is tonight, and I realized I haven't posted about session 3 yet. Last session found the party licking their wounds a bit from last time, and enjoying a bit of the treasure they picked up (they've been quite impoverished until now), along with some restorative wine and food.

They discuss a bit over dinner what to do next. They've got three adventuring sites to explore at the time (the Face in the Wastes, the Dome, and the Grogor Obelisk), and are very much getting the hang of sandbox exploration - plan your time and resources wisely. The obelisk at least they know they must attempt soon - the mystical scroll they obtained to gain entry purportedly only works beneath a full moon, and that is occurring early the next morning. They decide to equip themselves and set back out to the Head to hopefully plumb any remaining mysteries before the obelisk demands their full attention.

They purchase some lime and salt, in hopes this will aid them against the giant sluglike creatures known to haunt the interior of the great Head. They make it to the head without any great hardship, and once again perform the ritual of opening. They enter the head and begin to explore.

Remembering they had never checked out the Head's "basement", they head there first. They descend the spiral stair-chute cautiously, and find themselves in a box-like chamber lined with shining aluminum cabinetry, and a door with a bright yellow sign on the far wall. Exploring the cabinets, they find them stocked with crumbling papery boxes (rotten cardboard), filled with shiny aluminum cylinders (canned food). They crush one open and find it filled with long-spoiled pink ooze. They ransack the whole room and turn up nothing of real use until the end - a roll of laminated maps! They then turn their attention to the door.

The door has a a glassy, hand-shaped symbol in the center. The magic user places his hand upon it and a ghostly voice speaks, "user not recognized!". The (Lawful) cleric steps up and tries - "user recognized, proceed!". Past the door and into the next chamber, they see shuffling in the shadows at the far end a horde of man-like beings in rotten white jumpsuits. The horde lurches forward, eerie green lights flickering in their eyes, and their hands outstretch greedily. The party falls back into the storage chamber searching frantically for a good place to stem the tide. The Fighting Man then pulls forth the odd gun-like weapon found beneath the seat of the ornithopter in Session Two, clumsily loads a shell and fires at the mindless ranks before him!

There is a flash of multicolored light, and a wave of heat, once, twice, three times and then all goes dark. When the party's eyes readjust to the gloom, they find the horde is destroyed. Each wears a thin, platinum headband set with an onyx chip. They collect these and hastily exit the basements.

They turn their attention to the unexplored higher reaches of the Head, passing again the "Mayday!!" grille, and the head's facial control panel, until at last they come to the uppermost chamber within the head. A bluish low emenates from within and they find themsleves before a black iron pedastal with wires, tubes, and pulsing lights. Atop it is afixed a bizaare metal and glass contraption with what appears to be a brain floating within.

"Attend Me" a booming hollow voice intones, and the party feels a dire compulsion overtaking them. All save the fighting man reach helplessly into their packs and draw forth a platinum headband, placing it upon their own heads. The reptelf, upon so attiring himself, shrieks and descends into tormented madness, while the remaining go limp and await orders from their new master. The Fighting Man however draws forth the weapon of the ancients yet again, fumbling to load another shell. "Defend Me Slaves" booms the bodiless voice, and the characters lurch toward their former companion.

It all comes down to a single initiative roll - tpk or victory? Fortunately the fighting man wins the roll, and the Brain Chamber explodes into light, heat, and sound. Its a near-tpk anyway, as most of the characters are brought to death's door by the backlash. A little healing brings them round, and the party packs up whatever else they can find and exits the Head.

On the road back to Majinta they have an unfortunately run in with a less than honourable patrol from Majinta. Harsh words are exchanged, and then blows! Both sides eventually flee the scene, but the party realizes they will not easily regain entry to the city of Majinta without assistance. They return to the Witch of the Western Wastes and ask her assistance.

She agrees to provide them with disguises and a coin of charming. She also buys the stockpile of platinum headbands and tells the party they must have encountered the remnant of one of the infamous Mindlords of Dyskatyr, perhaps the result of one of their many attempts to gain immortality gone horribly awry.

With the help of the coin, the party returns to Majinta and plots their exploration of the great Obelisk. After midnight, they proceed to the obelisk and beneath the light of the full moon pull forth their scroll and read it. The Magic User realizes they are reading a simple scroll of detect magic. Nonetheless it outlines the secret door into the obelisk and reveals the mechanism to open the door. Once inside, they find themselves in a recurring sequence of perfectly cube shaped rooms, until they at last pass through an amorphous, spongy tunnel onto a great landing with iron bridges suspended from chains that seem to dissapear into a great void. They select a bridge at random and follow it across to another landing with a great pair of doors flanked by giant guardians with wicked curving greatswords.

They banter a bit with the guards, hoping to trick their way in, but things start to get ugly, and there we end the session.

Oh yeah, the cleric (Diago the Unwise) leveled up! He gets spells now!

Coin of Charming - this one-use item appears as a single, uncommonly shiny silver coin of the local mintage. If dramatically presented during a session of negotiation or bargaining, it will render all individuals (previously unaware of its presence) temporarily compliant and uncaring of the outcome, providing nothing too drastic and uncharacteristic is attempted. Once used, the coin reverts to normal tender, and anyone charmed by its effect forget the occasion altogether.
Posted by Al at 4:18 AM