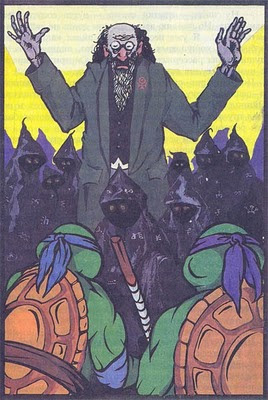 Ok, ok, its not actually Frazetta. You art detectives, you. But it is what appears to be the Mad Monk Rasputin and several Satanic Jawas facing off against Ninja Turtles, so that's got to count for something right?

To see a bigger version, as well as some more Russian Ninja Turtle craziness, head on over to Monster Brains. Ninja Turtles were a bit after my time in the Saturday Morning Cartoon arena, but had I known that in Russia they were facing off against Predators, Unicorn-Trolls, pig-faced orcs, Robot Dinosaurs with battle axes, some lost Elder Race from C.A.Smith, and the Spinning Flesh-Wheel of Death, I might have paid more attention. Or not.

Normal Frazetta transmissions to resume next week!
Posted by Al at 4:13 AM