I made it over to Erie, PA Saturday to roll some dice with Rob and Tim at the Erie Days of Gaming. Rob refereed a playtest of Goodman Games' forthcoming Dungeon Crawl Classics RPG. The time was slot was originally scheduled to be a playtest of a new S&W adventure from Rob, but Jason and John, the two artists for that particular module, showed up to play, so it was decided to switch places with the DCC game scheduled for later that evening (as they would obviously get few surprises from Rob's adventure!).


The System:
The DCC RPG proved to be a bare-bones d20 game (if you've played D&D 3.5 or Pathfinder, you will know all the basic elements here), with many of the usual mechanics: ascending AC, the standard d20 ability modifiers, Fort/Reflex/Will saves, DC (Difficulty Class) targets to hit with skill bonuses (though it seemed only thieves had skills), and so on.
I had hoped for a few more "old-school" idiosyncrasies, like descending AC, multiple saving throws, and percentile-based thief scores, but none of these would have done anything to actually speed up the game, so no huge complaints there. I'm sure Goodman wants this RPG to be as compatible with the existing line of d20 adventures (many of which are excellent, btw) as possible, so these are certainly reasonable design decisions. 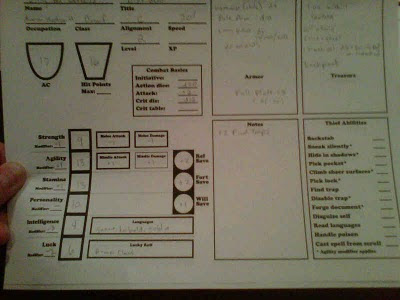 Click to make bigger and behold the glory of Bing.

Abilities were rolled on 3d6, in order, with no shuffling, re-rolling, or point exchange. Still six abilities, though they are Strength, Agility, Stamina, Personality, Intelligence, and Luck. Luck was a "new" ability (though wisdom is absent, Luck does not appear to "replace" it) with its own affects on the game. Your Luck modifier gets applied to a different game mechanic according to a random roll about your birth. For instance, you may have been born under Lightning, and so your +1 Luck modifier applies to your Initiative Check.
I thought this was a cool mechanic, but needs a bigger selection (I think it was a d12 or so chart, d100 would have been better) to avoid too much replication in the same party (we had like three people with the lightning sign, for example).

A player could also "burn" his character's Luck points to modify a roll, like a saving throw or attack. Those points are permanently lost until the character does something to earn them back, like rescue a damsel, etc.
The class selection was decidedly old school: Fighter, Cleric, Thief, Magic User, Elf, and Dwarf (yep, race-as-class, and pretty cool to see in d20 format, kind of like seeing a classic Harley round the corner in a Science Fiction film). On top of that, classes got titles based on their level and alignment. For instance, I had a "Dwarven Dissident" and a "Burglar". Alignments seemed to have more to do with class, as there were different alignment options for each class. This was kind of weird, but was never really explained in detail, so I may just be misconstruing something. Each character also rolled for a secondary profession, 1E DMG-style.
Initiative was individual, but we quickly changed that to group initiative (nothing eats up an old-school game's table time unnecessarily like individual initiative), and Goodman would be wise to include this as an "official" option or alternative if he wants to appeal to the OSR purchasing populace. Critical hits and fumbles were somewhat confusing at first (a brief "primer" would have been helpful if included with the playtest material), but we started to enjoy it by the second half of the session once we figured what we were doing.
Incidentally, a Thief's backstab is an automatic roll on the critical hit table, which I thought was cool (my "not-a-thief" Fagin scored a nice backstab auto-kill with an awl at one point).

I didn't notice any of the d20 "attack of opportunity" nonsense. That could mean we unintentionally ignored it, or it was not included in this game. I very much hope its the latter. There was a list of combat actions, like bull rush, etc, but we ignored them, preferring to describe our own actions in combat, thank-you-very-much. I hope Goodman leaves that list out of the final version, and lets DCC RPG referees experience the old-school high of "rulings not rules", but we'll see.

The adventure was fine (Rob goes into more specifics here), though we didn't get very far into it (I think). Being a group of old-school players, we took our time with every room, looking for puzzles and secrets, but we seldom found anything, so I'm guessing there was little to find except for combat. Hopefully this design ethic was a decision based on the need for a short playtest, and not an ethic for the overall line of forthcoming adventures I imagine will be released along with this RPG.
There was a bit of Jack "Vanciness" in the form of a mad sorcerer employing bizarre machines to "transmogrify" people into something horrid, though, so kudos there.

Of the 10 characters venturing into the dungeon, only three made it out alive (one being my dwarven village idiot, Bing the Witless (Int 4, Luck 6)! 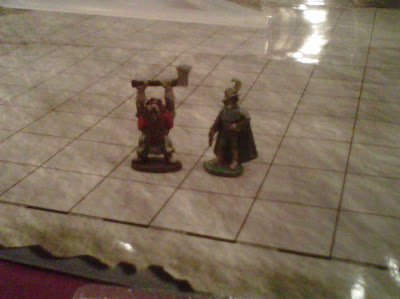 Bing realizes he can be taller than Fagin if he holds his arms up really high!

Rob let us know that Goodman's intention with this system is to give gamers a streamlined game that can be used to replicate the "Appendix N" experience. Now, Appendix N is all over the place, so I can only assume that Goodman's referring to the pulpier side of Appendix N's selections. If that is the case, there is a notable success, and a notable failure:

Magic-users - this class definitely has a pulpier feel (though the party's magic-user was killed in the opening moments of the game, there was a lot of discussion about his abilities). Every time a wizard uses his magic, there is a chance of the forces he commands corrupting his body and mind, which is cool. The Magic-user's weapon selection is the standard limited array though, and every fan of pulp fantasy knows Magic-users are just as likely as anyone else to pick up a rapier or pistol, so I'm rooting for this to be changed.

Clerics - When Rob mentioned the whole Appendix N design ethic, my eyes were immediately drawn to the cleric sheet. In my opinion, nothing says "Western European Christian Medieval" like the heal-mace-and-holy-symbol-wielding Cleric. Maybe its just me, but I'd rather see a "Priest" class, waving a curvy dagger around while summoning up the power of the Spider god to make enemies' faces melt. There was a lot of magical healing being thrown around too, which while helpful in a gamist sense, is not at all helpful evoking a pulp fantasy feel. I'd recommend toning back the magical healing a bit, and introducing a bit of OE Judges Guild style, non-magical, first aid healing.

All in all, the system was mostly fun to play, and worthy of a look when the final product comes out. Like Castles & Crusades or BFRPG, this may be a perfect "gateway RPG" to introduce players of the most current editions of D&D to the simpler joys of old-school gaming.
Posted by Al at 4:23 AM