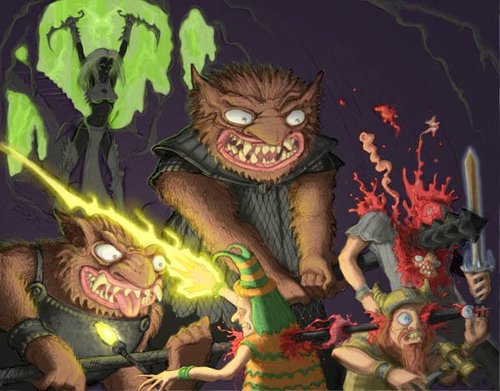 I always enjoy reading others' house rules, so thought I'd post my own as they currently stand for my Swords & Wizardry Omegea campaign.

Non-variable weapon damage: All weapons do a flat 1d6 of damage. Two-handed weapons roll 2d6, and pick the higher result of the two. Two-weapon fighters (Dex 13+ only) may choose either +1 to hit, or apply +1 to AC. Long weapons such as pole arms and spears may be “set” or used to reach through a “front line” of allies to strike at opponents. Axes or spiked weapons convey a +1 bonus to the normal chance to break through doors.

Healing: Characters heal at a rate of 1d3+level per day of complete rest, or 1hp per day of normal activity or rest “in the rough”. After any combat encounter, characters may spend 1 turn on first aid to heal 1d3 points of damage incurred in that encounter only. Characters reduced to 0 hit points are incapacitated/unconscious, those below 0 must roll 1d6 – the result indicates how many rounds the character has to live unless aid is administered, and how many days of complete rest are required to get back to 1hp and resume normal daily healing.

Actions: Most actions such as searching for traps or secret doors, breaking through stuck doors, tracking creatures, sneaking, listening at doors and such can be achieved with a simple roll of 1 on a d6. In many cases evocative player description of the action taken may positively modify the die roll or negate the need for a roll at all.

Class Weapon and Armor Restrictions: There are no restrictions on what weapons a character may use based on class: every class may use any and every weapon. Magic Users are still prohibited from using any armor, unless they are Elven, in which case they may wear leather or chain mail. Thieves may wear only Leather armor.

Helms & Shields: Helms and Shields convey a bonus of +1 to Armor Class, but may also impose a penalty of -1 to the chance to listen at doors, climb, etc (unless removed or stowed during the action performed). A helm or shield may be willingly sacrificed (broken) to avoid 1d6hp of damage from a successful hit.

Fighting Men: Fighting Men gain a bonus of +1 to-hit and damage with either melee or ranged weapons (chosen at time of character generation). Anytime a Fighting Man kills an opponent, he may take an immediate second attack against any other foe within range.

Thieves: The thief class from Beyondtheblackgate is used.
Posted by Al at 7:05 AM