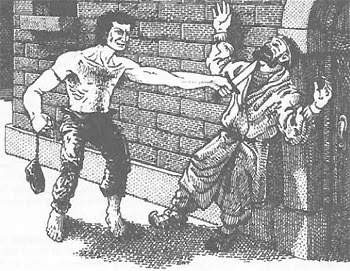 PC Events are to be rolled each month (or per period of down time in between adventures if you're a little more casual about timekeeping) to give each character a little something to do in their "real" lives. Erase each result as you use them, and replace them with others of your own creation. It should be up to the player whether to involve the other characters in his/her personal extracurricular activities or not.

PC Events: Thief (d12)
1. The local thieves' guild has placed a bounty on someone whose description closely matches that of one of your companions.
2. A shifty-looking halfling delivers a scroll to you and runs off. On the scroll is a black lightning bolt scrawled in charcoal.
3. The three prostitutes who live next door come to you in tears. Their pimp has been killed in a turf dispute and they beg you to take his place.
4. A fellow thief turned up at your door last night, handed you a small package to hold for him, made you swear not to open it, and left. This morning, he turned up dead in an alley.
5. A local minstrel is singing songs about a fellow committing acts of larceny you committed! While he doesn't call you out by name, it must be you. Or are you just being paranoid?
6. While counting your money, you notice an odd coin. It looks like a rare gold crown from the Lost Kingdom! You think you pinched it from that merchant over on Barrel Street. Where could he have gotten it from?
7.A foreign baron has taken lodging at the fanciest Inn in town, along with his three daughters. Each is dazzling, and each wears a stunning emerald necklace!
8. Every time you go out to make your rounds at night, you're followed by a watchful, white and gray owl. What the hells is going on?
9. A friend tells you a bounty hunter is headed into town today with a wanted poster featuring your ugly face!
10. The local constables burst into your room late one night, pinning you to the wall while they tear your room apart. They leave again, empty handed, warning you to keep your mouth shut. What were they looking for?
11. The daughter of an old, dead partner shows up at your door. She wants to be a thief like her dad, and she expects you to train her. And you're pretty sure she has a thing for you!
12. The mayor is throwing a ball tomorrow night. All the richest citizens will be there, wearing their richest jewelry! You must find an invitation!

And that wraps up the whole series, folks! Hope you get some use out of them :)
Posted by Al at 6:42 AM