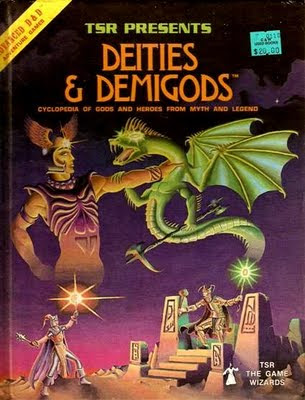 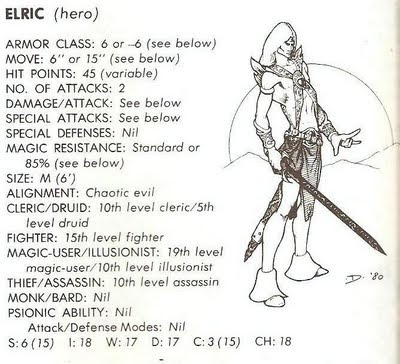 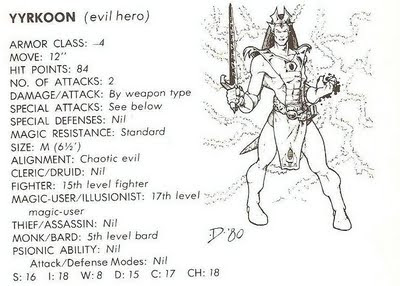 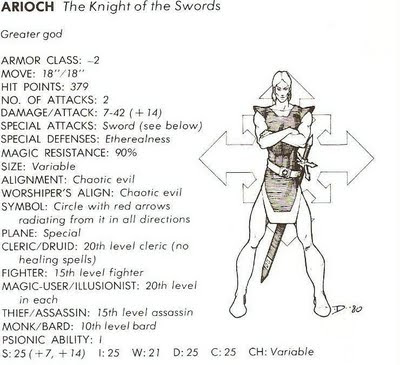 While the original "little" book, Gods, Demigods, and Heroes (1976) was technically the first official D&D product to include statistics for Elric, it was really the 1980 hardcover, Deities and Demigods, that would become the most notorious reference containing the albino anti-hero. Notorious because, by the time the third printing was released, two of the more popular pantheons had disappeared from the book: that of HP Lovecraft's Cthulhu mythos, and that of Moorcock's Melnibone.

Finding a copy of the rare first two printings became a sort of quest for the holy grail - it was pretty good gamer-geek cred to own one, and be able to reference Pyaray or Shoggoths when needed.

The story behind the disappearance of the two pantheons is an interesting one. For many years I assumed, apparently along with many other people (who would frequently state this), that the reason was that TSR had been busted for copyright infringement and been forced to remove the offending pantheons. The truth of course, was much stranger.

In fact, Cthulhu was already, by this time, public domain (though the contemporary publisher Arkham House would sell licensing rights), and TSR was pretty much free, within reason, to reference the material as they wished. The Melnibonean material was very much not in the public domain, but TSR contacted Moorcock directly, and he graciously gave them his permission to publish the material. So, legally, everything was fine.

Except in the eyes of a competitor of TSR's: Chaosium.

It just so happened that RPGs based on the Cthulhu and Melnibonean stories were this company's bread and butter, so they made kind of a stink when TSR released a book containing stats for what they look at as being their "territory". Not an unfair opinion, considering they were actually paying licensing fees for both properties. After some negotiation, Chaosium agreed to let the matter lie, provided TSR agreed to print a small "thank you" to Chaosium in the credits of the book. Not a bad deal, really, getting some advertising in your chief competitor's book. So that's what appeared in the second printing of Deities and Demigods.

However, by the time a third printing was due, TSR decided it was not worth advertising for a competitor, and the pantheons were yanked altogether.
Posted by Al at 6:26 AM