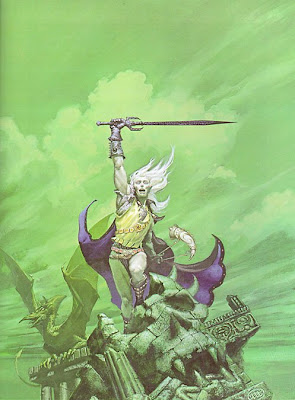 There's been a lot of discussion on the old-school blogs about D&D's implied "End Game", or what high level characters do when they're too big and powerful and important to go sneaking around robbing graves anymore. Typically this "retirement" means building a castle, clearing the wilderness around it - rendering it monster-free, and slowly entering the political power games of the region.

If you're using the Melnibonean books as campaign inspiration, however, they offer a drastically different End Game.


(I suppose I should warn you away from ***SPOILERS!!!*** if you haven't read the books yet and are planning to do so)


Moorcock's anti-hero was, of course, doomed from the beginning. We know early on that he is quite literally damned, his soul bargained away (as with most Melnibonean royalty) to the lords of Chaos, specifically Arioch in this case, in exchange for power. Adding to this doom is Elric's dependence on the dark sword Stormbringer, self-described as "a thousand times more evil" than Elric. As the series winds ever closer to its finale, Elric finds himself, often against his own will, acting as both an agent for and a foil against Chaos. Over and over, he saves his friends and loved ones from danger, only to watch helplessly as his own dark sword eats their souls. The conflict between Law and Chaos eventually heightens to the point where the entire world is consumed by their conflict.

Against all the odds, Elric proves to be a greater servant of Fate than of Chaos, and he manages to plant the seeds of the recreation of his world. There is no living happily ever after - Stormbringer inevitably claims its last and greatest victim, Elric himself.


What this all offers to the inspiration-seeking GM is a completely different set of possibilities for the big "End Game". Why not start planning the PC's demise from the very beginning - foreshadow it here and there, drop hints, insert tragedies, play up every curse and omen of doom.

Another possibility is the end of the campaign world itself. Plenty of adventure stories and games feature heroes attempting to avert the end of all things - how about making that end inevitable, but letting the player's have a hand in what comes after?