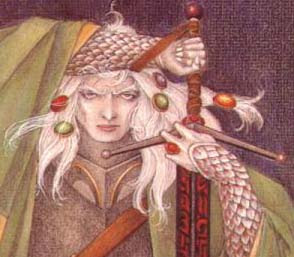 Just as it would be true, in many ways, to say that LotR led me to gaming, it would also be true to say that gaming led me to Michael Moorcock's doomed hero, Elric. The albino emperor of the debauched Melniboneans, as well as his black, soul-stealing sword Stormbringer, were often brought up at game tables, but at first, I admit, I was a little leery of the character. For one thing, Elric was often spoken of with the same evil grin and "hail satan!" irreverance as the big, dark metal groups of the time, like Black Sabbath and Iron Maiden.

Lets just say that, at age 10, I was more of a Yes and David Bowie kid than a Black Sabbath and Iron Maiden kid. And that, to me, to the ultimate hero was Aragorn son of Arathorn, returning from the Wilderness to save his kingdom from the dark lord with a reforged sword from ancient days, and eventually marry the hottest elven babe around.

Elric was not exactly cut from the same mold.

Yet, slowly, I became more and more intrigued by this guy everyone kept talking about. And his sword, too, the one that not only cut enemies to pieces, it fed upon their souls! And, well, it was mentioned in the DMG's Appendix N, so it can't have been all bad, right? So eventually I borrowed a book from one of my gaming buddies, a slim volume titled "Sailor on the Seas of Fate". It wasn't the first book of the series, but as it turns out, it was an excellent introduction to the character and the world he wandered.

Many of the books in the infamous Appendix N were influential in our gaming, but I'm not sure any set the tone of the game so closely. The dark, edgy quality of the Elric books was like a constant storm brewing on the edges of our campaign worlds, reminding us that tragedy and pathos were just as likely to befall a fantasy setting and its characters as victory or apotheosis. The books added a whole new dimension to our games - it was no longer unthinkable that an entire world could go down in flames, after all. A certain sword in the depths of White Plume Mountain became a sought after relic, leading us to replay the module again and again, at least once a campaign.

Over the next few weeks, I'm going to devote a little space on BtBG to the exploration of this character and his world.

And I'm going to listen to some Black Sabbath while I do so.
Posted by Al at 4:47 AM