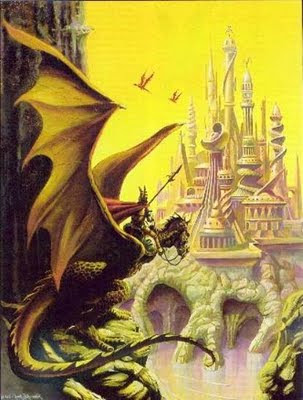 One of the most compelling parts of the Elric stories, to me, was the world Moorcock created for his tragic albino anti-hero. Elric is the 428th (and last) emperor of Melnibone, an empire which once dominated the entire known world. Conquest and rule was the natural order of things for the alien Melniboneans; the pacts they had made with the lords of Chaos, as well as their command of dragons and sorcery, made them far more powerful than the mud-grubbing "normal" humans of the world.

But their 10,000-year rule eventually led to complacency and indolence. The dragons tired, retreating to their caves for ever-longer periods of hibernation. The Melniboneans were content to indulge in the pleasures the wealth of their empire provided. Slaves, drugs, and horrific arts became their world, and their capitol of Immryr became known as the Dreaming City.

When the mud-grubbing humans of the outside world began to form empires of their own - slowly chipping away at the edges of Melnibone - it was too late for the debauched dragon lords to do anything about it; their race had sunk too far into decline. The so-called Young Kingdoms were rising, and Melnibone was becoming a relic of the past.

Of all his people, only Elric was able to truly see this. While his mad cousin Yrkoon would envision Melnibone somehow rising from its torpor to subdue the world once more, Elric would instead see the futility of this, and act to hasten the Dreaming City's demise.

To the north of Melnibone lay an isle which was unique among the Young Kingdoms for, rather than reviling it, seeking to emulate the decadent empire: Pan Tang. From their city of screaming statues, Hwamgaarl, the dark sorcerers of Pan Tang had a dream of their own: to replace Melnibone as the heart of a world dominating empire, a dream they would take extraordinary and tragic steps to attempt. The island would also produce one of Elric's chief nemeses: the sorcerer Theleb K'aarna.
Posted by Al at 6:52 AM