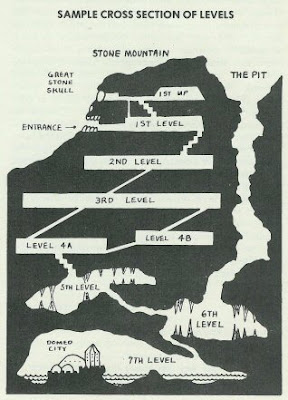 Yep, August is Megadungeon Month here at BtBG, so stay tuned if you're into vast, sprawling Underworlds filled with dread foes, cunning traps, and unfathomable mysteries. Hopefully, you'll find something useful here for your own Megadungeon explorations as the month progresses, whether its new equipment, monsters, spells, traps, megadungeon design elements, or even a whole new character class.

First up, here's some links to some very nice inspirational reading, and a nice selection of message-board threads discussing the subject.


The last couple of years have seen a bit of a resurgence of interest in this oldest-of-old-school gaming environments, which is a good thing in my opinion. Click the following to see what other folks are doing with their Mile-Deep-PC-Grinders:

*This excellent thread at Dragonsfoot, discusses one of the most important elements of Megadungeon design: Mapping!

*A companion peice to the above discusses Filling the Megadungeon.

*One of first threads on Megadungeon design, here at Knights & Knaves Alehouse.

*A tale from one of the first Megadungeons, Castle Greyhawk, featuring the infamous Erac!

*A good thread at ENWorld on Megadungeon design.

*Philotomy Jurament's excellent essay on the Dungeon as a Mythic Underworld.

I've sent Torgo out to fetch me a growler of IPA, there's a lot of reading to do here!
Posted by Al at 5:56 AM